We aim to take a practical approach to living a self-reliant, preparedness lifestyle that will increase our quality life day in and day out, regardless of all the stuff that life has a tendency to throw at us.

That being said, there is a situation that has been brewing for a long time now that is probably the closest thing to a true SHTF type of scenario we’re likely to face. This situation is the complete and utter collapse of the American economy. Ever since the country switched away from the gold standard and the Federal Reserve, along with its corrupt fiat (debt-based) money system has essentially taken the reigns of the American economy, we have been on a long, downward spiral that has led to America being mathematically incapable of financially supporting itself or the millions of programs it’s citizens have blindly demanded over the last 100 years.

The Worst 10 Things Non-Preppers Will Be Forced To Deal With When TSHTF. (#5 May Be Fatal!)

There have been a lot of theories, fear mongering and misinformation that has been spread around the preparedness community about what the economic collapse really is and what it means for the common American. Today we’re going to take a more practical look at the downfall of the American economy and how it is likely to affect your day-to-day life as a prepper. We’ll also talk about some ways that we can mitigate the damage that the collapse can inflict on your own personal lifestyle as it spreads like wildfire across the country. 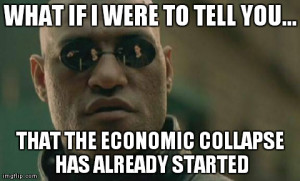 You are living in the collapse right now

The economic collapse has been talked to death by economists that use a lot bigger words than I do, however the reality of the situation is pretty simple. As a country (and as a people) we spend A LOT more than we make. When you cut out all the political grandstanding, misinformation and
advanced economic theories from people with more degrees than common sense, it just boils down to the fact that as a country, we don’t make enough money to pay for all the stuff that society has demanded, on top of the complete and utter mismanagement of our tax revenue and debt by all forms of government.

Although a lot of blame can be laid at the feet of Washington for involving us in wars and conflicts that have nothing to do with our country or its security whatsoever, economic policies that are simply smoke screens for paying off political favors to special interest groups and outright political incompetence, the federal government is just a small piece of the collapse. The real blame has to spread much farther than that. Fingers can be pointed at state governments, local governments, and yes, as much as we all love to blame the politicians, a huge chunk of the blame has to be laid at the feet of the American public for evolving into the reactive, irresponsible and spend-happy nation that it is today.

Many people who write about the economic collapse make it out to be some sort of “event” that could “happen” at any time. Honestly, this is just pure fear mongering, with the intent (usually) of getting you to buy something. The funny thing is though, is that the real situation is a lot scarier than they’re making it out to be. The economic collapse isn’t “coming” we’re living in it right now. Government shut downs, entire cities going bankrupt, local government services only being open for 3-4 days out of the week, huge cuts to police and fire services, more and more restrictions placed on technological innovations and financial responsibility …the list goes on and on.

Recommended: Are You Prepared For World War Three? When that defining moment finally comes, will you have the time to remember what you could have done to stop it?

The collapse will have a significant effect on your personal finances

A lot of people out there feel that they are somehow “removed” from anything happening in our national economy. To them it’s all just arguing and talking heads in the media. The fact is that the collapse absolutely will (and is already) affecting your personal finances. It doesn’t take a mathematician to determine that the average Americans grocery bill is a heck of a lot higher than it was 10 years ago. The average Americans wages may be slightly higher than they were in years past, but due to the rapidly increasing rate of inflation, the actual value of the money people are making is much less than it used to be.

Here are just a few ways that the economic collapse will affect your personal finances.

Inflation will be the death of the sleeping American

Some may be asking “How? How is my money less valuable than it used to be?” Well the simple answer is inflation. Inflation is a term that gets thrown around a lot, but far too many people in this country simply throw it away as some sort of inevitable and inescapable “thing” that happens…somehow…with the economy. No. Inflation doesn’t just happen. Inflation is actually the direct result of your government intentionally devaluing your money so that they can continue to print more of it to pay for government programs and expenses that we cannot afford through direct government revenue sources.

The rising costs of inflation

It’s actually quite simple. For something (like money) to have value it has to be finite. Precious metals were used as currency for centuries simply because they were rare, and took significant energy to harvest from the earth. That energy and the lack of abundance of precious metals made them relatively rare and valuable and therefore societies chose to use them as a barter item when two individuals wanted to trade but one party did not have an item desired by the other. If somehow a massive amount of gold and silver were discovered in the world, then the value of those metals would decrease substantially and the prices for good and services that those metals could buy would also increase. It’s simple supply and demand…the more of something you have, the less demand there is for it and the more of it you’ll need to buy something that is in more demand.

Now that the Federal Reserve can pump money into our economy at will, the value of that money is decreasing and has been decreasing for generations. At this point, we’re entering a period of “hyperinflation” where there is so much money being pumped into the economy that the earning potential of the average American cannot keep up with the constant devaluing of money and the subsequent increase of prices for everything. This simply means that prices for goods and services are higher than people can afford.

Also read: How Will People React After The Crash Of The Great Reset?

To combat inflation you need to make more and spend less

So what can we do to mitigate the financial risks of the economic collapse? We really only have two choices. We either reduce our spending or increase our revenue. In reality, you need to be doing both.

You can’t be complacent with staying at the same job for decades at a time. Most companies will give out a yearly raise, which in theory is supposed to gradually move you up the economic scale, account for inflation and essentially make you more financially successful the longer you are in a position. Well, thanks to inflation your yearly raise isn’t going to be enough to even combat the raising inflation rates, let alone make you any better off than you were the year before. The only possible way to work around the inflation trap is to be continually improving your professional skillsets so that you can qualify for positions that pay more. To put it bluntly, you shouldn’t be looking for a raise, you should be looking for a better-paying job… constantly. Obviously there are other ways to increase your personal revenue streams like starting a business, working extra hours or getting a second job, but one way or another, if you aren’t actively doing something to combat inflation it is mathematically impossible for you to ever get ahead. 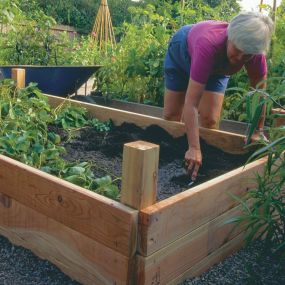 Reducing expenses is only other option we have for combating inflation. Thankfully as preppers and self-reliant people that’s what we do! We grow gardens to not only be more self-reliant on our food sources, but to avoid paying the increasing process of supermarket foods. We eliminate debt wherever possible, we use alternative energy sources, we store food, we’re frugal with our purchases and whenever possible we strive to unchain ourselves from the shackles of modern convenience and dependency…which is a good thing, because we’re entering a period of time where those conveniences aren’t going to be so convenient (or affordable) anymore.

This is a lot to take in for one post, so we’re going to break here for today. Please check back tomorrow for the conclusion of this article. We will be discussing how the economic collapse is dividing the American people more and more every day, how crime and violence will continue to rise substantially in many areas as the collapse continues to get worse and how the economic collapse will be a turning point in American history that could truly determine the political, social and financial framework of every nation on this planet for generations to come. Best of all, we will be discussing real things you can do today to prepare for every disaster the collapse will throw at you.

Update: Click here for the part 2 of 2 of this article

7 Replies to “This Is How The Economic Collapse Will Change Your Day-To-Day Life!”