One of the most important steps in preparation is home protection. The hole point of your preparations is to protect your family, your life and all your supplies and assets that you own on your property.

In this guide, Administrator Ryan from Us Crow, explains hot to turn your house into a fortified bunker.

We will show you how to make your home bullet resistant, and airtight, while making it damn near impossible to breach without a direct hit from a 40mm grenade, or twenty lumberjacks working at it for a few hours. Why should you consider turning your home into a fortified bunker?  If you live in a population of less than twenty thousand citizens, in a rural area, and have no plans on bugging out to another location it’d be best to fortify your home protecting you from attack.

The trick is having a way to institute the protective measures in a relatively short amount of time and you don’t want to have these fortifications up before SHTF, lest ye look like that ‘crazy doomsday guy’ painting a big red target on you.  Keeping this in mind we will also go over some concealment techniques that will allow you fortify your home while not giving up that the home has been fortified.  By no means will this project be cheap, but can you really put a price on your family’s safety? Me neither. The expected cost of this project will be between five hundred to seven hundred and fifty dollars.  You may be able to do it cheaper by re-purposing certain items people commonly throw away.  Be thrifty. 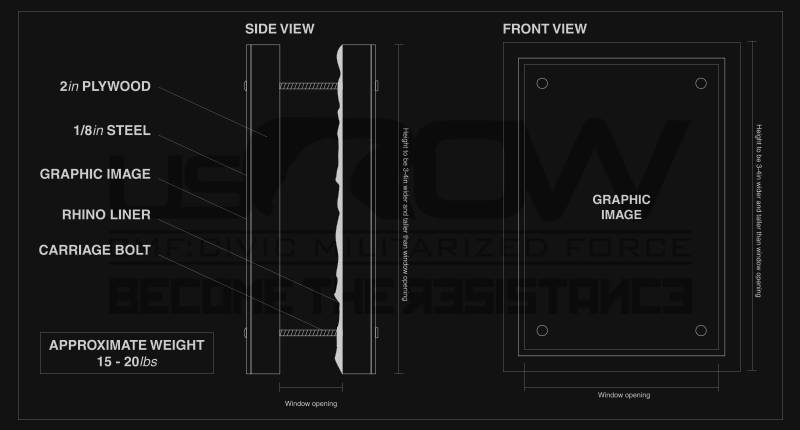 Now, I’m not big on misrepresentation or lying so in the spirit of full disclosure I extrapolated this idea from the popular television show Doomsday Preppers, and made a few tweaks as I saw fit.  In the graphic above I have drawn up schematics to better describe the steps needed to construct this fortification.  To construct this project you will need;

Recommended article: Rally Point – Getting Your Family or Group Safely Together Again After a Crisis

For this project you will need to measure the height and width of each one of your windows(do not assume all your windows are the same size).  With these measurements in hand you will need to cut your steel sheets, and wood three to four inches larger than the opening of each window.  Once cut you can assemble these two protective layers, the inner layer (inside home) will consist of a wood layer, 1/16in steel outer layer, and a 1/4inthick layer of rhino liner.  The outer layer (outside home) will consist of a wood layer, and a layer of 1/8in steel.  You with then drill four holes that line up to the absolute corners of your windows frame on both the inner and outer layer, you will then feed the carriage bolts through these holes with the nuts on the inside of the home to prevent slipping out of place.

As stated in the graphic each unit will weigh between 15-20lbs, which really isn’t that much. The reason for this layering is fairly simple, the outer layer will prevent small arms fire.  Should the unit be struck by rifle fire it’ll get past the first layer only to fragment before penetrating the inner layer.  Fairly simple setup, and if you don’t believe me, take a unit out to the range and watch what happens. 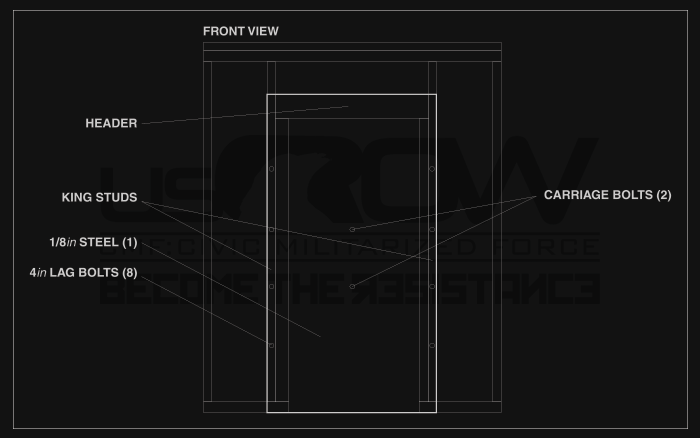 Fortifying doors is much more simpler than window fortification.  For one, you can simply buy a steel door, and call it a day but for those frugal folks that need to have a cheaper method of fortifying their homes we have drawn up a simple setup for your to follow.  If you haven’t figured it out by now to achieve bullet stopping power you need to layer various materials together.  Unfortunately, out of the factory most doors are simply made of wood, and other ‘soft’ components.  And don’t get me started on the locking mechanisms with puny two inch screws.  To fortify your doors you will need;

Unlike the windows this will require a little fabrication before the SHTF to be used successfully.  You will need to cut your 1/8in sheet of steel to the outer width of your king studs, and the height of your header.  Mark your four holes on each side depicted in the graphic above and drill holes through the steel and studs so that they will line up when you’re ready to fasten the sheet to the king studs.  Additionally you will want to drill two holes (or possibly use existing peep holes) through your door to insert your carriage bolts.Note: You can hang two long pictures over these holes to disguise them until they need to be used.

Unfortunately there are no schematics for breach point fortifications because they can range through all different shapes and sizes.  You can use the same theories described above.  The main point for listing this if that you identify any points in your home that could be breached by some roaming nincompoops i.e. air conditioning ducts, cellar doors, etc. is that you fortify them by any means to prevent entry.

If you look at the image depicting window fortifications you’ll notice one of the elements defined as ‘graphic image’.  To conceal your window fortifications you can take pictures of each one of your windows from the outside with a high resolution camera and have a graphic designer crop them to the edge, and print them so they can be mounted to each individual window.  From a distance it’ll make your home look empty.

If things go south you don’t want to get stuck in a death trap so you need to establish a secure exit point.  If you have a two story you can leave your windows open to fire on hostile forces, while making your escape through the back.  Or you can use some of the breach points as exit points since they won’t be a primary focus for entry. Either way you need to have a bead on your exit point, having eyes on your exit before you jam out so you don’t run directly into enemy fire.

Like all things in the prepper community, you need to train your family on the steps to take when bugging in.  You don’t want mass confusion when the shit hits the fan and no one in your family has no idea how to put these fortifications in place.  Be prepared for doomsday, and train your family on the steps they need to take, and their roles for bugging in, or else you would’ve spent all that time and money for nothing when you get breached before you can put them up.

1,294 Replies to “How to turn your home into a Fortified Bunker”