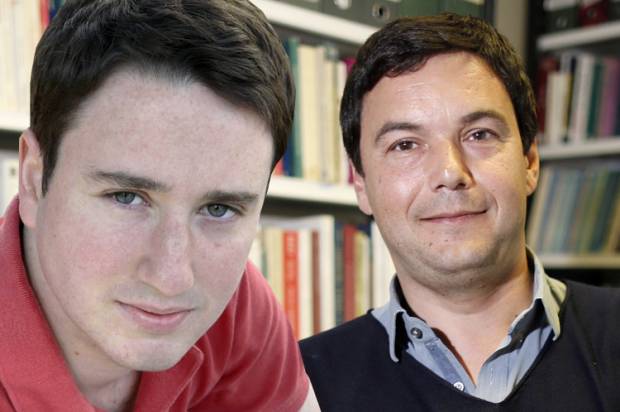 The growing wealth gap in developed countries is an incredibly disturbing development. New research suggests that inequality might be growing even faster than we thought. Worryingly, this concentration of wealth has coincided with a concentration of debt at the bottom, as families struggle to maintain their standards of living with stagnating incomes. But even this data understates wealth inequality, argues Gabriel Zucman in “The Hidden Wealth of Nations,” because official statistics fail to capture offshore wealth holdings.

Zucman is an assistant professor of economics at the London School of Economics and a visiting scholar at UC Berkeley. At only 27, he’s already co-authored papers with economics superstar Thomas Piketty. His most recent paper estimates that global offshore holdings total $7.6 trillion and rob governments of hundreds of billions in tax revenues each year. He also finds that over the past few decades, companies have stored more and more profits overseas, making the effective corporate tax rate less than half the tax rate on the books.

All of this is happening at the same time as Thomas Piketty’s blockbuster treatise, “Capital in the Twenty-First Century,” has brought the issue of wealth and income inequality to the forefront of the political discussion by introducing historical data on inequality. Piketty argues that the best way to address the data, political and economic concerns of wealth is a progressive international tax on wealth holdings, as well as policies to build wealth for the middle class. What was once a technocratic discussion about efficiency has become a deeply political debate about who gets what, as slow growth makes distribution more important. Even the most conservative economists have to grapple (albeit clumsily) with addressing the moral dimension of inequality.

The extent to which inequality has been a historic fixture of market economies, punctured only during what economists call “The Great Compression” of the mid-20th century, has led to an intense debate among economists. Was the “Great Compression” the result of forces like war, unprecedented innovation and environmentally unsustainable population growth or the rise of powerful working class interests? Is it possible for the middle class to fight against entrenched interests that increasingly control the political as well as the economic system?

I talked with one of the most luminous young economists on wealth inequality and how to fight it.

Starting on the more wonky side, there was a bit of a discussion in your research involving the distinction between tax evasion and tax avoidance. I believe the former being illegal and the latter being legal but sketchy. Could you talk a little bit about how you dealt with that in your research?

Absolutely. Several things to distinguish. On the one hand, there’s tax evasion by wealthy individuals, which is just having bank accounts in foreign countries and earning investment income on these accounts and failing to report that income to the IRS. That’s pure tax evasion. That’s completely illegal. Another thing is corporate tax avoidance, usually [by] multinational corporations [that] try to operate within the letter, if not the spirit of the law. You can say, “Well, it’s legal.” But it depends with the definition of legal. Usually some of them conduct illegal activities, but most multinational corporations at least try to stay within the letter of the law. I guess that’s the key distinction.

Then there’s another distinction, which is regarding households, regarding individuals. Some of them have bank accounts in tax havens in Switzerland and other countries and declare their holdings and their income to the IRS, to their home country tax authorities. Having foreign accounts is not illegal, per se. What is illegal is failing to declare the accounts and the income generated by these accounts. I’ve tried to take that into account in my computations: What’s the fraction of overall bank accounts of individuals which are declared to tax authorities? The existing evidence is limited, but what we have suggests that at least globally about 80 percent of the bank accounts in tax havens are not declared to tax authorities. The bulk of the private wealth held offshore evades taxes.

And is therefore illegal?

Now, $7.6 trillion I believe was the number that you came up with stashed in these offshore accounts. What is the impact of that with regard to the distribution of wealth?

That’s an interesting question. What I can say is that I think that today it’s increasingly difficult to measure wealth and to estimate the distribution of wealth. There are many reasons to believe that the estimates that we have — based on survey data, on tax data, or even the likes of Forbes Magazine, all these data sources — if anything understate the true level of wealth concentration. The reason is that there is a growing fraction of total world wealth held offshore. As I said, the bulk of it evades taxes so it’s not reported on tax returns. It’s unlikely that it’s reported in surveys and so on.

The big idea is that because of the development of the offshore wealth management industry, it’s getting more and more complicated to accurately measure the distribution of wealth at the very top, and it’s likely that we substantially underestimate wealthy inequality. Particularly in Europe and in developing countries, this is a first-order problem.

It seems the increase in wealth inequality has also coincided with an increase in debt inequality. There have been many more middle class and poor families taking on debt. Do you see those trends as at all correlated or is there anything there?

That’s another great question. I’d like to know the answer. It’s true that it’s striking to see the correlation between the increase in debt for the middle class and the increase in wealth inequality at the top of the distribution. In particular, the calculations we now have with [Piketty collaborator] Emmanuel Saez show that in the decade prior to the financial crisis from the late 1990s to 2007, the bottom 90 percent of the population dissaved — the saving rate was negative — and the dissaving was as large as 4 or 5 or 6 percent of income per year in the years just preceding the financial crisis. It’s a remarkable development because when you think about normal times, when the government deficit is 3 or 4 percent, everybody is very worried.

But what happened then is that 90 percent of the population was dissaving at the rate of 4 to 5 to 6 percent per year. That is really one of the big facts today for macroeconomics to explain. Why did that happen? Is it linked to and is it due to inequality? Maybe. Maybe the middle class borrowed a lot because its income was not growing fast. It was stagnating and so if you want to see consumption increase, standard of living increase, the only way you can achieve that is by borrowing a lot. Maybe the fact that almost all income growth went to the top and not to the rest of the population was the driving force behind the increase in debt for the middle class. That’s a very serious hypothesis but I think we need to do more research in this area. This is one of the central facts that my research is trying to explain.

Your book “The Hidden Wealth of Nations” harkens back to Adam Smith, and obviously Piketty’s book is titled after Marx, so you have two books with the titles that are reminiscent of classical economists. In that vein, I’d like to talk political economy. Are you on board with Piketty’s proposal of an international wealth tax? It seems to me that, given your conclusions, that would be a policy that would flow from that. Is that something that you’re in favor of as well?

Oh yes, absolutely. I’m definitely in favor of a global wealth tax. I think that wealth taxation in general is going to be potentially the main policy tool to try to address rising income and wealth inequality. There are many strong arguments in favor of wealth taxes: the fact that the aggregate ratio of wealth to income rises — wealth inequality increases because the wealthy tend to have higher returns on their assets than would the less wealthy.

All of this is strongly supporting the view that in addition to income taxes and everything, we need a progressive tax on wealth. Yes, it needs to be global ideally and ultimately because otherwise you have the obvious problems of flight and people hiding assets or changing their country of residence. I fully agree, but then you need to think about how to make that happen. I think that in addition to a wealth tax, you need some kind of financial registry.

Have you thought about policies that might increase wealth-building at the bottom and at the middle? Is that something that you’re interested in?

Tax policy, on the other hand, can be a powerful way to make sure that not all growth goes to the top as is the case today, but rather that growth is equally distributed and that whole income and wealth groups grow at roughly the same rate, which certainly is a desirable thing in the long run.

I also think a progressive tax on net wealth (not only real estate but financial wealth) would be a very powerful instrument to curb the increase in wealth inequality. Nothing is written in advance. With the right policies, this trend in rising wealth concentration could end pretty soon, sooner than we believe. Yes, my conclusion is that policies are key and yes, there are forces in market economies that push towards more wealth concentration but that can be overcome with the proper policies.

By Sean McElwee. Sean McElwee is a writer and researcher of public policy. His writing may be viewed at seanamcelwee.com. Follow him on Twitter at @seanmcelwee.

One Reply to “Conspiracy of the plutocrats: Secrets of the wealth-inequality explosion revealed”