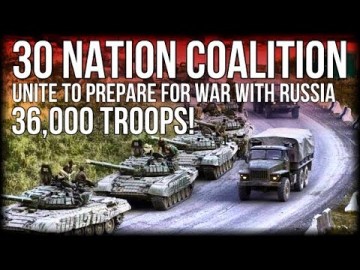 Meanwhile just 1200 miles away in the Estonian faction of Trident Juncture is in full swing in Estonia, the Army’s Scouts Battalion practices storming buildings and firing at targets just outside the Estonian town of Voru. During a break Sergeant Indrek Kangur talks about what he hopes to get out of the exercise.

At the same time 1100 miles across Europe in Plymouth on the south coast of England, an elite fighting force the Royal Marines, use boats, helicopters and amphibious vehicles to storm a beach in a show of force. Commodore Martin Connell, Commander, Amphibious Task Group says the Trident Juncture exercise is a ‘real valuable opportunity for NATO’.

While English forces flex, demonstrating Alliance cooperation, 1000 miles to the east, a Danish infantry unit practice manoeuvres in armored vehicles and engage in simulated attack, at the Adazi military base in Latvia.

Related article: 12 Bad Strategies That Will Get Preppers Killed

The Top 101 Items to Disappear First During a National Emergency

To the south, in the Mediterranean sea, the German navy engages in defensive maneuvers. In the heat of a simulated attack on the German Frigate Hamburg they fend off multiple air, land and sea threats. Operations Officer Alexander Mummert realized that in Trident Juncture, the complexity of the scenario will be greatly heightened.

Trident Juncture is NATO’s most ambitious land, sea and air exercise in more than a decade. Involving 36,000 troops from 30 Allied and Partner Nations, units from all contributing countries have been preparing with drills.

The size and scope of these drills cannot be understated as World war three intensifies in Syria. NATO is no longer using failed rhetoric against their claimed Russian threat. They are materializing the weapons of war in full view of Putin’s military.

Alive After The Fall Advice : Do you want to learn how you can cope with a food shortage, a mass pandemic a natural disaster or any other type of emergency situations?Stay safe. Stay prepared. – watch this FREE video!

You will not see this on the news tonight. Neither will your friends and family. Inform the world – bypass the corporate media – distribute this to your social networks.