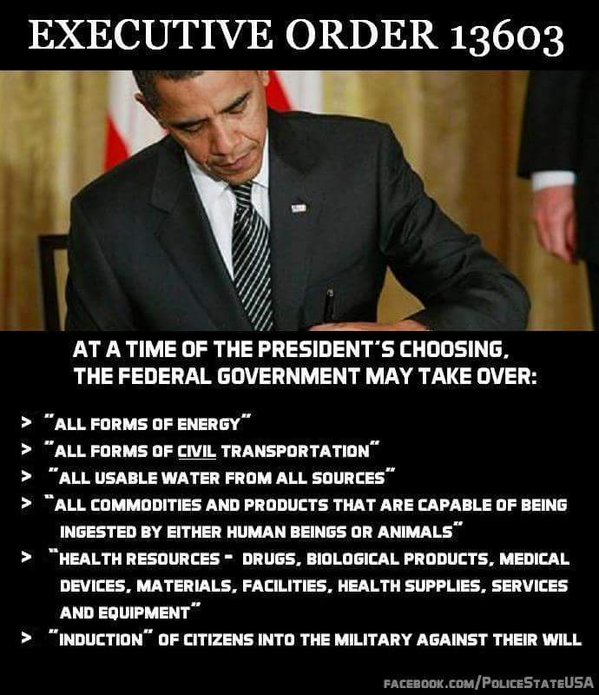 President Obama signed his own executive order which allowed for the President to enact slave labor, on a large scale, on American soil.

For the Americans who have been targeted for FEMA camp detention, most will voluntarily self-incarcerate in order to avoid starvation for both them and their families. The following excepts from EO 13603 will be enacted.

Third world population control, using food as one of the primary weapons, has long been a matter of official covert US national policy and a portion of President Obama’s Executive Order (EO 13603) is a continuation of that policy. Americans will be the new third world and your food will be withheld in order to enforce compliance with the planned slave labor in support of the WW III production needs.

Recommended article: When we will wake up in an America without electricity and society will totally collapse

Most Americans will report for duty on a voluntary basis in order to avoid starvation. Duty for what?

According to Executive Order 13603, the President, or the head of any federal agency that he shall designate, can conscript “persons of outstanding experience and ability without compensation,” in both “peacetime and times of national emergency.” I can hear the Obama supporters now as they will write to me and say, “Obama would never do that, you are drinking from the Kool-Aid”. Well, here it is, you can read it for yourself.

Sec. 502. Consultants. The head of each agency otherwise delegated functions under this order is delegated the authority of the President under sections 710(b) and (c) of the Act, 50 U.S.C. App. 2160(b), (c), to employ persons of outstanding experience and ability without compensation and to employ experts, consultants, or organizations. The authority delegated by this section may not be redelegated.

This means that Obama, and his fellow communists, can seize any resource, property, or person at any time for any reason, including being able to force that person to perform assigned labor without being paid.

There is only ONE word for forced, “uncompensated employment”. That word is slavery. Congratulations to President Obama, he has effectively repealed the 13th Amendment to the Constitution.

Related: Economy is Collapsing: What Should You Expect?

Section 601 of the act specifies, in part, how far the government can go in terms of making you their slave.

(1) collect and maintain data necessary to make a continuing appraisal of the Nation’s workforce needs for purposes of national defense;

(3) upon request from the head of an agency with authority under this order, consult with that agency with respect to: (i) the effect of contemplated actions on labor demand and utilization; (ii) the relation of labor demand to materials and facilities requirements; and (iii) such other matters as will assist in making the exercise of priority and allocations functions consistent with effective utilization and distribution of labor;

(4) upon request from the head of an agency with authority under this order: (i) formulate plans, programs, and policies for meeting the labor requirements of actions to be taken for national defense purposes; and

Obama Executive Order 13603 Authorizes Slavery In The US

3 Replies to “This Executive Order Basically Omits All Our Freedoms. Why Would This Ever Be Required? A Real Potus Empowers Citizens”