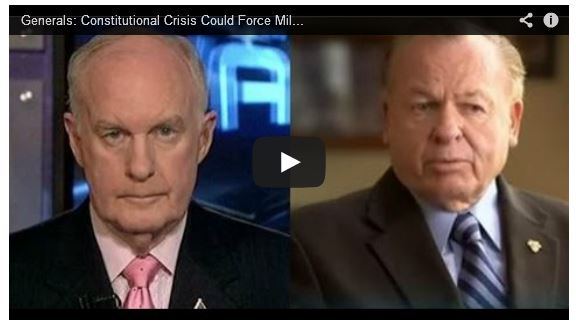 In a interview with Trunews, Retired U.S. Air Force Lt. General Thomas McInerney and Retired U.S. Army General Paul Vallely spoke about the possibility of a Constitutional Crisis that may occur if Barack Obama refuses to protect the American people from the threat of ISIS and radical islam. The Generals also said that it may come to the point where the US Military may have to remove Obama from office. The Generals also stated that Obama has moved the US stance on Terrorism from one of fighting against it to one of providing it aid and comfort.

The fact that retired United States Military Generals are even talking about removing Barack Obama from the Presidency shows how much of a Constitutional crisis exists.

Listen to the audio discussion on YouTube below. What do you think?

Recommended article: Economy is Collapsing: What Should You Expect?