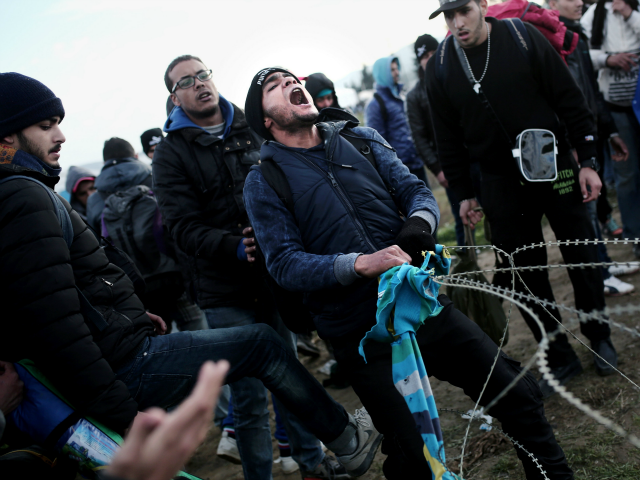 Just unbelievable and utterly unconstitutional. Obama is warning the states that if they don’t accept his invading force of Syrian refugees they will face ‘enforcement action.’That’s a broad term with military overtones and it smacks of dictatorial tyranny. He’s claiming the Supremacy clause gives the Executive Branch control over the states. It does not… not even close and he knows it. They claim they cannot reject the refugees on the basis of religion and race. How about on the basis of potential terrorism? They speak of suspension and termination below… what does that even mean? They are also demanding welfare and benefits for the refugees upon arrival. This is sheer bullying. The states should stand their individual ground and fight back over this.

The Obama administration has warned states to comply with federal efforts to resettle Syrian refugees in communities around the U.S. or else find their states subject to enforcement action.

In a letter this week, the Office of Refugee Resettlement threatens states concerned about resettling Syrians with punitive responses if they refuse to accept the refugees. ORR explains that states may not refuse ORR-funded benefits for refugees on the basis of religion and national origin.

“Accordingly, states may not categorically deny ORR-funded benefits and services to Syrian refugees,” ORR Director Robert Carey wrote in the letter. “Any state with such a policy would not be in compliance with the State Plan requirements, applicable statutes, and their own assurances, and could be subject to enforcement action, including suspension and termination.”

Related article: FOR THANKSGIVING, OBAMA WANTS US TO TAKE IN 1,300 ISIS SUPPORTERS

The agency also pointed to the Civil Rights Act of 1964, prohibiting discrimination for federally funded assistance benefits. Refugees are immediately eligible for welfare and other benefits upon admission to the U.S.

“Thus, it is not permissible to deny federally funded benefits such as Medicaid or [Temporary Assistance for Needy Families] to refugees who otherwise meet the eligibilities requirements,” the letter reads. “ORR is committed to ensuring that all refugees receive assistance and services vital to achieving their potential in the United States and becoming self-sufficient, integrated members of our communities.”

ORR acknowledged in its letter the concerns dozens of governors and lawmakers have raised about the potential for terrorist to infiltrate the refugee process, be placed in their states, and threaten their constituents.

“ORR is aware that state and local leaders, including some governors, have expressed concern about the resettlement of Syrian refugees in their states. In light go these concerns, we note that the resettlement process begins with the work of our federal agency partners in screening and vetting refugees,” Carey wrote.

“While the United States has the most generous refugee system in the world, the American people are rightly concerned about admitting Syrian refugees and the impact it would have on the safety of their families and neighbors,” Goodlatte said in a statement. “In light of these concerns, the majority of state governors have taken positions that reflect the views of their residents.”

He further criticized the administration as “hypocritical” for threatening states that might not comply with refugee resettlement while turning a blind eye to sanctuary cities — that refuse to cooperate with immigration enforcement.

Also read: US Economy Is Collapsing – Americans Are Out Of Money

The Consequences Of A Large Nuclear War, WW 3

The government reiterates they are screening and vetting the refugees. Bull crap. They are not in police or intelligence databases. They have no valid paperwork and no background that can be checked. Biometrics? What a joke. This is insane. We are to accept hundreds of thousands of refugees shoved on us by the UN and just suck it up and enjoy the invasion. We must have asked for it by the way we dress. The supposed ‘enforcement action’ refers to the loss of federal funding. Tell them to stuff their money and get lost. Obama will use force if he thinks he can pull it off. Nudge is turning to shove very quickly here. Shove back.

by CAROLINE MAY, BreitBart