Pioneer women who had to decide what few precious things to carry across the plains surely made one choice in common—their own individual collection of “receipts,” as recipes were then called. For them, these were reminders of a security left behind and a hope for the abundance of the future. In the interim, they simply did what they had to do to keep their families alive.

Many early memories of pioneer food concerned the frugality with which the Saints lived: “We lived on cornbread and molasses for the first winter.” “We could not get enough flour for bread … so we could only make it into a thin gruel which we called killy.” “Many times … lunch was dry bread … dipped in water and sprinkled with salt.” “These times we had nothing to waste; we had to make things last as long as we could.” *

No doubt the “receipt” books were closed during these times, and efforts were given simply to finding food and making it go as far as possible.

Saving our forefathers ways starts with people like you and me actually relearning these skills and putting them to use to live better lives through good times and bad. Our answers on these lost skills comes straight from the source, from old forgotten classic books written by past generations, and from first hand witness accounts from the past few hundred years. Aside from a precious few who have gone out of their way to learn basic survival skills, most of us today would be utterly hopeless if we were plopped in the middle of a forest or jungle and suddenly forced to fend for ourselves using only the resources around us. To our ancient ancestors, we’d appear as helpless as babies. In short, our forefathers lived more simply than most people today are willing to live and that is why they survived with no grocery store, no cheap oil, no cars, no electricity, and no running water. Just like our forefathers used to do, The Lost Ways Book teaches you how you can survive in the worst-case scenario with the minimum resources available. It comes as a step-by-step guide accompanied by pictures and teaches you how to use basic ingredients to make super-food for your loved ones. 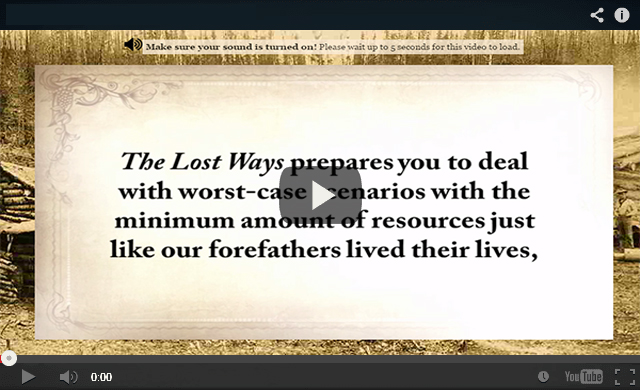 But slowly, even out of this deprivation, recipes grew. The pioneer women learned to use any small pieces of leftover meat and poultry with such vegetables as they might have on hand—carrots, potatoes, corn, turnips, onions—to make a pie smothered with Mormon gravy.

Thrift fritters were a combination of cold mashed potatoes and any other leftover vegetables and/or meat, onion for flavoring, a beaten egg, and seasonings, shaped into patties and browned well on both sides in hot drippings.

One Danish immigrant mother made “corn surprises” to brighten up the scanty diet of bread and molasses. To corn soup, made with ground dried corn, she added anything colorful or tasty that she could find: bits of parsley or wild greens, carrots, sweet peppers, chips of green string beans, chopped whites or yolks of hard-cooked eggs, or a little bit of rice.

While the first few companies of pioneers were comprised mostly of New Englanders, other states were sparsely represented, as were Canada, England, Scotland, Wales, the Isle of Man, Scandinavia, Germany, and even Spain and Australia. Within the next five years thousands more from other European countries poured into Zion. And with them came their favorite national recipes.

By the time these immigrants arrived, the critical food shortages were somewhat alleviated, with most families having access to milk and cream, butter and cheese, beef, lamb, pork, chicken, eggs, flour ground from their own wheat harvest, molasses and honey, and a little later, sugar.

Undoubtedly recipes passed from hand to hand. Recipes for steamed Boston brown bread were probably exchanged for those for Oklahoma graham gems, while German Saints taught the Welsh how to make their spiced red cabbage and learned in return how to make Welsh currant bread. Truly, the cooking pot of the early pioneers was a melting pot for many kinds of cooking from many countries and ranged from the simplest and most humble of recipes to elaborate and elegant dishes from the kitchens of European kings.

Early diaries are filled with happy reminiscences of work and fun: salt-rising bread mixed in mother’s “baking kettle” while traveling in the wagon, then baked over the campfire at night; bacon and sour-dough pancakes cooked over campfires; molasses taffy pulls made possible by generous dippings from the skimmings of molasses boilers; peach preserves cooked in the last of the molasses batch and stored in big barrels; fruits and vegetables dried for winter storage; buffalo pie and wild berries; raspberry and currant and gooseberry bushes planted near the house, yielding fruit quickly and easily.

Chickens were brought across the plains as early as 1847. A favorite among early recipes was velvet chicken soup, brought to the valley by an early English convert.

Thoroughly clean chicken and cut into pieces. Put in covered kettle with cold water and salt. Bring to boil quickly and simmer until chicken is tender. Remove chicken from stock and remove meat from bones (saving meat to use in croquettes, pie, etc.) Return bones to soup stock and add peppercorns (or white pepper), chopped onions, and chopped celery. Simmer together until a little more than a quart of stock remains in pan; strain, cool, and remove all fat. Add rich milk or cream, bring to a boil, and thicken with cornstarch that’s been mixed smooth with a little cold water. Add butter and season to taste. Beat eggs with a little cream. Pour 1 cup soup over egg mixture, stirring well, then pour egg-soup mixture back into soup, stirring constantly, and cook 2 minutes. Serve hot in soup dishes, adding bite-size croutons if desired.

Side Pork and Mormon Gravy

Mormon gravy, common fare among the early settlers and apparently a creation of necessity expressly for the times, is still hearty and nourishing for many of this generation who like to make it with ground beef or frizzled ham or bacon and serve it over baked potatoes.

Cook meat on both sides in heavy frying pan until crisp. Remove from pan and keep warm. Measure fat and return desired amount to skillet. Add flour and brown slightly. Remove from heat and add milk, stirring well to blend. Return to heat and cook and stir until mixture is thick and smooth. Season to taste. Serve with side pork on potatoes, biscuits, cornbread, or even pancakes.

The years 1862 and 1863 saw thousands of Scandinavian Saints leaving their homeland to come to Zion. With them came some of their favorite recipes, including Norwegian fruit soup and Swedish jam cake.

To each cup water, add amounts given above of prunes, currants, raisins, and cinnamon. Cook until fruit is tender. Add sugar, vinegar, and sago or tapioca and bring to a full rolling boil. Remove from heat, remove stick cinnamon, and allow to stand for a few minutes before serving.

Of English origin, “currant whirligig” was made in pioneer times with native wild currants. It is equally good made with other tart berries, such as cranberries.

Mix sugar, flour, spices, and salt together. Pour slowly into hot water, stirring constantly. (If using honey, use cold rather than hot water and blend ingredients together before heating.) Cook until thickened, stirring. Place currants in 8×8-inch square pan or baking dish and pour hot sauce over them. Set into preheated 350° F. oven while making topping.

Sift flour, soda, baking powder, salt, and sugar into mixing bowl. Cut in shortening, then add egg and milk. Mix to stiff dough. Roll into 9×12-inch rectangle; spread with honey and melted butter mixture. Roll from long side as for a jelly roll, pinching edges, and cut into 9 pieces. Remove berry sauce from oven and place dough swirls at even intervals on top of hot fruit filling. Bake at 350° F. for 15 minutes. Serve warm with or without whipped cream.

Typically German, this recipe for spiced red cabbage has been passed down as a favorite. It is still used in many homes today, traditionally in some as part of the Christmas feast.

Combine cabbage, onion, apple, and potato in small amount of boiling salted water and simmer until tender. Drain and combine with remaining ingredients.

This currant bread recipe was brought from Wales in 1856. The Welsh people often used it as a Christmas bread. The Saints found wild currants when they first arrived in the valley, and it is possible that they dried them for winter use. Raisins were not available until later, when cuttings for grapes were brought from California.

Soften yeast in 1/4 cup lukewarm water. Cut shortening into flour. Add remaining ingredients, including yeast mixture, except water. Mix thoroughly, then add enough warm water (about 3 cups) to make a soft but not sticky dough. Let rise overnight (about 7 hours), then form into 4 small loaves. Let rise again (about 2 hours) and bake at 300° F. for 1 1/2 hours. Especially good with cheese.

This potato cake recipe came across the plains with a young woman from Austria over a hundred years ago. Potato cakes are delicious served hot or cold with any kind of meat, fish, poultry, or salad.

Wash and peel potatoes, then grate medium fine. Combine with salt, milk, eggs, and flour. Drop mixture by spoonfuls into hot shortening in skillet and fry to golden brown on both sides.

With the wild fruits—plums, cherries, grapes, gooseberries, currants—and the glorious fresh fruit cultivated so successfully from imported cuttings, the early pioneer women were soon making some of the delicacies that reminded them of “home.” Two of the favorites were Swiss apple-cherry pie, a recipe that came into the valley with a young Swiss convert who was famed for its making, and 101-year-old pastry, as good today as it was in the early days.

Cut shortening into flour and salt. Beat egg lightly in a 1 1/2-cup measure; add vinegar and fill cup with cold water. Add just barely enough liquid to dry ingredients to hold dough together—about 4 tablespoons—reserving remaining liquid for next batch of pastry. Handle dough as little as possible. Roll out into pastry and use as desired. Makes two 9-inch pie shells.

One Reply to “When Critical Food Shortages: A Melting Pot of Pioneer Recipes”