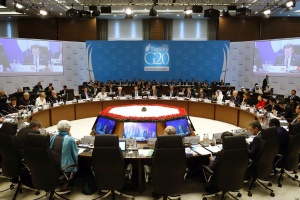 NATO says the alliance will provide any means necessary to battle Islamic State militants in the wake of the deadly Paris bombings.

Earlier on Monday German Foreign Minister Frank-Walter Steinmeier said that he does not see the use of the NATO mutual defence clause since France has not invoked Articles 5 in the treaty which stipulates that an attack on one member state is an attack on all members.

The IS attack in France took place a just over a month after Russia began a bombing campaign in Syria which caused a flood of thousands more refugees to Europe and two weeks after IS claimed responsibility for blowing up a Russian airliner over Egypt’s Sinai Peninsula.

“As regards ISIL/Daesh (referring to Islamic Sate) we stand ready and determined to provide whatever is required from the NATO military authorities in support of any political decisions that might be made over the coming days, and we’ll wait and see,” Deputy Supreme Allied Commander Europe, General Sir Adrian Bradshaw, told a news conference in Riga.

At the G20 summit in Turkey Russian President Putin said Russia was ready to support Syria’s opposition with air strikes in their fight against Islamic State (IS). The US, NATO and Syrian opposition forces say as little as 5% of Russia’s airstrikes in Syria have hit IS.

British Prime Minister David Cameron joined a chorus of leaders calling for Russia to begin targeting IS instead of bombing moderate rebel opposition forces. Cameron said London remained opposed to Russia with regard to Ukraine as well as the Kremlin’s overall strategy.

David Cameron, British Prime Minister: “In terms of my relationship with Putin, look, we have very big disagreements. Big disagreements about Ukraine, big disagreements about Syria. I’ve always tried to keep lines open so we can talk. I think frankly, calling him very directly about the airplane disaster in Sharm, which he mentioned and I think it was the right thing for me to do to ring him and share the information that we had, I think that underlines the sort of common battles and struggles that we have, that where we do agree with each other we should work together.”

IS warned in a video on Monday that any country hitting it would suffer the same fate, promising specifically to target Washington.