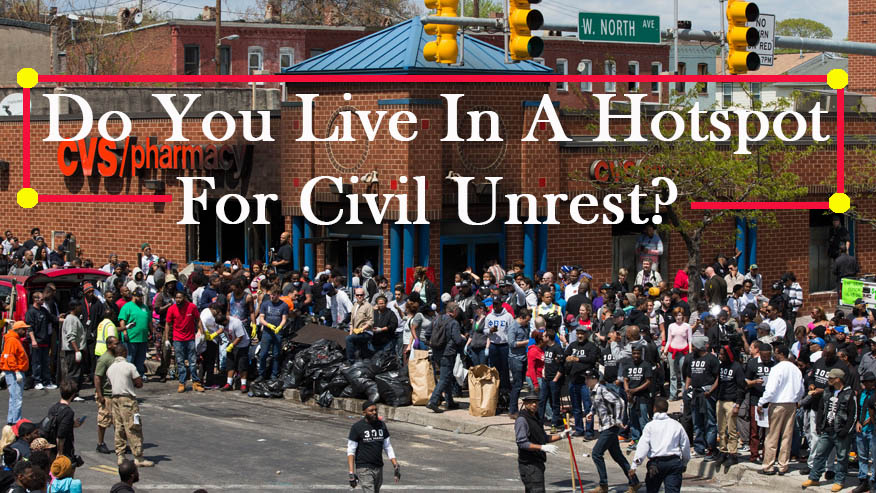 Civil unrest is often a dangerous byproduct of many of the large disaster scenarios we prepare for. Current political and social issues, as well as natural disasters can trigger isolated outbreaks of civil unrest anywhere. Civil unrest affects more than just the civilians involved and the law enforcement that are called on to subdue it. The property damage from the Rodney King riots in Los Angeles alone was over 1 billion dollars, and this was just in 1 isolated area. Many believe civil unrest at a national scale will soon be upon us. Will you be ready?

What is civil unrest and how does it start?

Civil unrest is a broad term used to describe a group of people that are publically displaying protest and displeasure over any number of social and political issues. Civil unrest isn’t limited to riots and although common, violence and destruction aren’t necessary to classify civil unrest. In September of 2011, tens of thousands of protesters flocked to New York’s Wall Street district to protest economic inequality in the Occupy NYC movement. Although mostly a peaceful protest, it did cost local businesses and the city itself millions of dollars in damages.

In contrast, the 1992 Rodney King riots in Los Angeles caused 50 people to lose their lives, hundreds to be hospitalized, thousands arrested and cost the city and local businesses over a billion dollars in damages.

Civil unrest can start for many reasons. Just recently, the acquittal of George Zimmerman sparked many small riots all over the country. In nearly ANY large-scale natural disaster there has always been report of civil unrest, rioting or looting, regardless of the size of the affected area. Civil unrest can be caused by a large variety of reasons, and is often accompanied by violence and destruction on a large scale.

How long does civil unrest last?

Civil unrest can last as short as a few hours to several days or even weeks. Since civil unrest is such a broad term, several “pockets” of civil unrest can occur in random areas in an affected disaster area. Law enforcement is quick to respond to these types of incidents when possible. However, as we saw in hurricane Katrina, many reports of rioting and looting were reported in areas that law enforcement could not or would not respond to, causing immeasurable violence, lawlessness and destruction.

Related: Prophet of doom: US presidential candidate John McAfee has some scary warnings for society

Civil unrest is typically quelled quickly by law enforcement, however there is no guarantee that law enforcement can or will respond to the event promptly. When faced with the possibility of civil unrest or riots, it is best to assume that, at least for a time, you may be on your own to defend yourself, your property and your family. For more information about civil unrest and emergency disaster management, check out this video report.

How likely is civil unrest in my area?

Historically, larger outbreaks of civil unrest tend to occur in largely populated areas. There are a few reasons for this; civil unrest is almost always accompanied by looting and in larger populations, there are more “spoils” for the looters in larger areas. Larger cities also typically have stricter laws regarding firearms and self-defense, which makes homes and businesses more favorable targets since owners are likely to not have the ability to defend them.

Larger cities are also more susceptible to civil unrest because of a higher density of poverty. Higher minority populations have also historically played a large factor in the frequency of civil unrest.

It may sound like civil unrest is isolated to only larger cities. Although this has been largely true, it is often misleading. Many preppers feel that smaller suburbs or rural areas are immune from civil unrest. This is not the case, and will unfortunately be proven within the next few years.

Cities, towns and municipalities all over the country are beginning to feel the effects of the ongoing and unstoppable US economic collapse. Dozens of towns all over the country have simply been wiped off the map because the economy simply couldn’t sustain a population there anymore. When this happens, businesses close civil services such as hospitals and police departments integrate into larger cities and the response time for any disaster increases dramatically.

The farther the nation falls into debt, the less money the government will have to spend on numerous programs like welfare, food stamps and subsidized housing, Recipients of these benefits are spread all over the country, not just in big cities. These benefits cannot mathematically sustain themselves with our current economy. When these benefits run out on a national scale, incidents of civil unrest will rise at an alarming level no matter where you are.

What can you do to prepare for civil unrest?