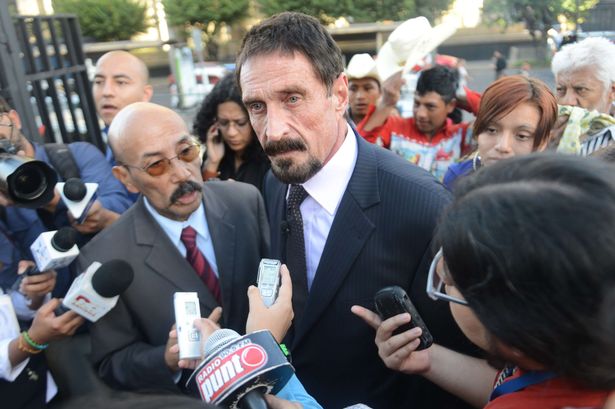 We all know a nuclear bomb attack would blow a city to smithereens.

But if that same deadly weapon was detonated in the atmosphere above a nation, the lingering effects could prove even more devastating.

The maverick tech pioneer and US presidential candidate John McAfee has issued an urgent warning about “electromagnetic pulse attacks” (EMP) capable of bringing “civilization to a cold, dark halt”.

To perform an EMP assault – similar to those used in the sci-fi blockbuster The Matrix, starring Keanu Reeves – an aggressor just needs to detonate a nuke high in the air.

This generates an EMP wave capable of wiping out the electronics which modern society relies on, causing stock markets to crash and food deliveries to fail.

Related: When we will wake up in an America without electricity and society will totally collapse

McAfee’s wealth peaked at $100million after he developed the world’s first anti-virus program, so he is all too aware of the dangers of a cyberwar.

“Experts agree that an all out cyber attack, beginning with an EMP (electromagnetic pulse) attack on our electronic infrastructure , would wipe out 90% of the human population of this country within two years of the attack,” he wrote.

“Yet our leaders are nearly all ill prepared for this near certain, not-too-distant event.”

To illustrate his concerns, McAfee linked to a letter to the Wall Street Journal from R. James Woolsey, former director of the CIA, and Peter Vincent Pry, who served on the CIA’s EMP Commission.

This note also said an EMP attack would kill nine out of ten people due to “starvation, disease and societal breakdown“.

The countries who already have the capability of delivering one of these weapons include North Korea and Russia, who are not exactly friends of the West, as well as China.

Also read: EMP Attack On America – Preppers Vs Non-Preppers In The First 72 Hours – Who Will Live, Who Will Die

“Designs for variants of such weapons may have been illicitly trafficked for a quarter-century,” they wrote.

“It would use a trajectory that does not approach the U.S. from the north, where our sensors and few modest ballistic-missile defenses are located, but rather from the south.

“The nuclear weapon would be detonated in orbit, perhaps during its first orbit, destroying much of the U.S. electric grid with a single explosion high above North America.”

6 Replies to “Prophet of doom: US presidential candidate John McAfee has some scary warnings for society”