This summer the Federal Emergency Management Administration (FEMA) is conducting a large-scale preparedness drill, simulating a 9.0 magnitude quake along the Cascadia Subduction Zone (CSZ), followed by a Tsunami that could create waves over 50 feet high.

The Drill, dubbed Cascadia Rising, will bring together local and state emergency responders, FEMA, and a number of military organizations and government first responders. The Drill comes as a number of top scientists are warning the Cascadia Subduction Zone is a disaster waiting to happen.

The Cascadia Subduction Zone spans from northern California to southern British Columbia. This subduction zone can produce some of the strongest earthquakes on the planet, and researchers are warning that the area could be long overdue for a quake that could exceed a magnitude 9.0.

While most people have heard of the San Andreas Fault line in California, very little attention has been given to the Cascadia Subduction Zone. But when compared to the San Andreas, the CSZ is a much larger and scarier threat.

“Cascadia can make an earthquake almost 30 times more energetic than the San Andreas to start with, and then it generates a tsunami at the same time, which the side-by-side motion of the San Andreas can’t do,” Chris Goldfinger, a professor of geophysics at Oregon State University told CNN.

“This would be like five or six Katrinas all at once, up and down from California to Canada, would be the closest thing I can think of,” said Goldfinger.

Federal, state and military officials are taking the threat seriously, and are working to put together a plan that will dictate their response when the ‘Big One’ hits.

The Cascadia Rising preparedness drill will test plans that have been put together over the last couple of years, plans that expects over 14,000 deaths, 30,000 injuries, and the complete devastation of the Pacific Northwest coast. According to planners, the quake could devastate the region for decades and could displace a million people from northern California to southern Canada.

How Bad Could it Get?

Over seven million people throughout the region could be affected by a CSZ Quake/Tsunami.

When the quake hits, the force is expected to cause liquefaction across large areas of the porous region. In areas that aren’t liquefied, the force of the quake could cause huge landslides, devastating destruction to thousands of bridges and buildings, and could cause as many as 30,000 avalanches in Seattle alone. 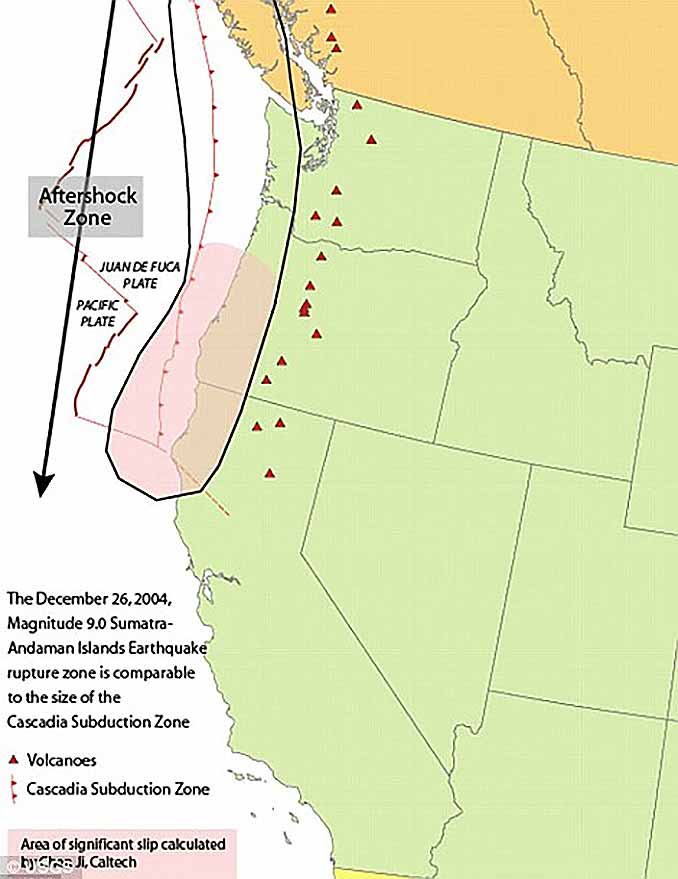 This USGS Map highlights the areas where land will be most affected by the shocks, causing landslides or liquefaction.

As bad as the quake will be, it’s really only the tip of the iceberg. About 20 minutes after the quake strikes, a devastating Tsunami with waves as high as 50 feet will slam the Pacific Northwest Coast. Those in low lying areas will probably not have time to escape the wrath.

The following model was created by the NWS Pacific Tsunami Warning Center (PTWC). It’s based off modeling from an earthquake that hit the area on January 27, 1700, causing a massive tsunami that struck the coasts of Japan.

Emergency Response to the Threat

According to the Daily Mail:

”Worst-case scenarios show that more than 1,000 bridges in Oregon and Washington state could either collapse or be so damaged that they are unusable.

The main coastal highway, US Route 101, will suffer heavy damage from the shaking and from the tsunami.

Traffic on Interstate 5 — one of the most important thoroughfares in the nation — will likely have to be rerouted because of large cracks in the pavement.

Seattle, Portland and other urban areas could suffer considerable damage, such as the collapse of structures built before codes were updated to take into account a mega-quake.”

What you can do to protect yourself from a Mega Quake

If you live anywhere near this area or in any earthquake zone for that matter, you need to take earthquake preparedness seriously. There are a number of safety precautions you can take to protect yourself and minimize damages. Here are some tips :

Some of these exceptional skills are hundreds of years of old and they were learned the hard way by the early pioneers.

Remember… back in those days, there was no electricity… no refrigerators… no law enforcement… and certainly no grocery store or supermarkets…So I really can’t think of anyone more qualified in sharing real-life survival lessons than people who lived through times like these.

By Robert Richardson, Off Grid Survival