As the Pentagon prepares for the first time to test the U.S. ability to intercept and destroy an intercontinental ballistic missile (ICBM) in flight, North Korea has again threatened to target the U.S. homeland with nuclear weapons.

Responding to reports that a U.S. Navy carrier group in the vicinity of the Korean peninsula is to be joined in the area by a second one, Pyongyang’s mouthpiece KCNA news agency said that joint military exercises involving two carrier strike groups “will only make the DPRK’s nuclear weapons target the mainland of the U.S.”

Another regime organ, the Rodong Sinmun, added Monday that the DPRK – the Democratic People’s Republic of Korea, the North’s formal name – “is fully ready to counter any form of war, operation and combat the U.S. imperialists want to choose.”

It warned that the North Korean military had the will “to make the enemy sustain the most terrible horror and bitterest defeat on their mainland” in the event of a confrontation.

Earlier, the U.S. Navy announced that the USS Ronald Reagan, the only forward-deployed carrier, had set sail after a maintenance period at its base at Yokosuka, south of Tokyo, for patrols in the Western Pacific.

The USS Carl Vinson carrier strike group has been in the region since being deployed there on President Trump’s orders last month amid an ongoing series of North Korean missile tests.

Having two nuclear-powered Nimitz class carriers and their accompanying vessels in the Western Pacific at the same time would be a significant although not unprecedented show of force.  (It has also now been reported that a third carrier, the USS Nimitz, will be heading to the Western Pacific with its strike group in the coming days.)

Vice President Mike Pence, in an address to personnel on the Ronald Reagan flight deck last month, pledged that “the United States will strengthen its presence in the Asia-Pacific.”

North Korea early Monday carried out yet another ballistic missile launch – at least the 11th this year and the third since South Korean President Moon Jae-in took office on May 10. Unlike the previous two medium-range missile launches on May 13 and 21, Monday’s was believed to be a short-range Scud-class projectile. It landed inside Japan’s exclusive maritime economic zone.

The U.S. and the world are waiting for North Korea to test an ICBM, following Kim Jong-un’s declaration in a televised new year speech in January that preparations for test-firing one had “entered the final stage.”

He said the key element Pyongyang has yet to master is to ensure a missile survives reentry into the atmosphere, “but that’s really a matter of trial and error.”

“They understand the physics; it’s just the matter of design.”

“Let me be clear on this point,” Stewart said. “If left on its current trajectory, the regime will ultimately succeed in fielding a nuclear-armed missile capable of threatening the United States homeland.”

“While nearly impossible to predict when this capability will be operational,” he added, “the North Korean regime is committed and is on a pathway where this capability is inevitable.”

On Tuesday, the Pentagon’s Missile Defense Agency was expected to carry out a test of its ground-based midcourse defense system (GMD), for the first time trialing its ability to detect and destroy an incoming ICBM rather than other types of missiles.

The GMD architecture includes ground-based interceptors based at Vandenberg Air Force Base, California and Fort Greely, Alaska, designed primarily to deal with threats from North Korea.

The test is expected to entail a missile with ICBM characteristics being launched from the Ronald Reagan Missile Test Site on Kwajalein atoll in the Marshall Islands. From Vandenberg, more than 4,500 miles away, an interceptor will then be launched with the aim of shooting it down.

Previous GMD tests, with non-ICBM target missiles, have had a mixed record – nine out of 17 attempts since October 1999 have succeeded, with the most recent, in June 2014, a success following three consecutive failures between January 2010 and July 2013.

By contrast, AEGIS shipborne ballistic missile defense shield tests have had a higher success rate, 35 successful intercepts in 42 attempts between 2002 and last December.

And the Terminal High Altitude Area Defense (THAAD) missile defense system, recently deployed in South Korea for the first time, has a 13 out of 13 test intercept success rate between 2006 and 2015.

North Korean leader Kim Jung Un is getting off easy.

How can that be given the First Amendment freedoms of speech and of the press?  Simple: The federal courts do not obey the Constitution or follow the law. They are cesspools of corruption, with judicial filth like United States District Court Judge Donald E. Walter of Shreveport, Lousiana, and Prosecutorial Garbage like Assistant United States Attorneys William R. Hogan, William Ridgway and Diane MacArthur of Chicago.  Public servant filth, each and every one of them.

I was put on trial – hung jury.  I was put on trial a second time – hung jury.  At that point, having been jailed without bail for four months and then held under house arrest and unable to work or earn money, I was driven into Bankruptcy.  Unable to pay my lawyers, I was appointed a federal public defender and put on trial for an astonishing THIRD time. ( a practive usually reserved for top Mafia bosses).   Verdict: Guilty.  Off to federal prison I went for 33 months, then 3 years probation where I was banned by court order from being on radio or operating a web site.

While I said nothing to indicate my personal intent to attack anyone – but got jailed anyway – Kim Jung Un has repeatedly threatened to actually use weapons of mass destruction. Weapons he actually possesses.

He has repeatedly threatened to attack the mainland United States and kill millions of us.

What has the US federal government done to him for these actual threats (as opposed to my _opinion_?)   Nothing.

I want the United States government to capture or kill Kim Jung Un for making repeated Terroristic Threats to actually murder we Americans.

I want the the United States armed forces to attack and destroy by force, the country of North Korea so as to neutralize their ability to nuke us.

Each time North Korea launches another missile in a test, it gains valuable information about how to improve their missile technology toward their public goal of nuking America.

Each time North Korea tests another nuclear bomb, it gains valuable information about how to miniaturize such weapons to mount atop a long range missile.

Previous US Administrations were content to do nothing.  The luxury of doing nothing is now past.  It is time to attack North Korea as a matter of self defense.

They have threatened to nuke us.  We have a right to defend ourselves.

That’s my view, what’s yours?  Use the COMMENTS feature below to have your say.

Could you survive after an EMP attack? Would you be able to sustain your loved ones when all hell breaks loose? In this video, I will unearth a long-forgotten secret that helped our ancestors survive famines, wars, economic crises, diseases, droughts, and anything else life threw at them… a secret that will help you do the same for your loved ones when America crumbles into the ground. I’m also going to share with you three old lessons that will ensure your children will be well fed when others are rummaging through garbage bins. Click here to learn all about the 3 skills that will help you thrive in any crises situation. 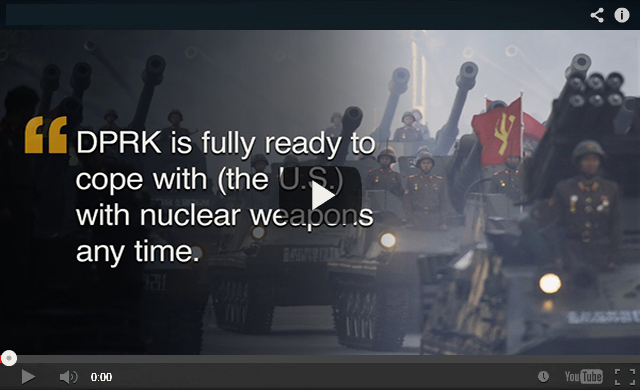