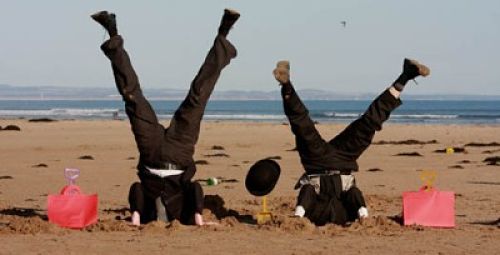 All of the homes that have been burgled have been very well kept. immaculate gardens, clean windows, decent car on the drive…dead giveaways that there may well be something worth stealing inside. Several less well kept homes were passed by in favour of those homes that appeared to have richer pickings.

Interestingly, one of the houses that escaped is actually owned by an exceedingly well off old gentleman who just cannot maintain his property as well as he once did. It’s not decrepit and run down by any ones standards, but it doesn’t have the wow factor that those homes around his do.

There will always be those people who make a living by taking from others. That won’t change. However, as people are squeezed more and more there will be more cases of home invasion carried out by those that don’t have the means to make ends meet, those who will do whatever they have to do to manage…even if this is something they wouldn’t have considered before.

In the event of a collapse, or a national disaster, this problem will escalate quickly, particularly in the more urban areas. There are many ways that you can give the impression that your home is not worth bothering with. I am not suggesting that you let the place run down. The way the world is right now we need to maintain our property to the best of our ability so should the time come when home maintenance is way down the priority list we know things will be okay for a while at least. In the meantime however:

I am talking about not having the garden looking like something out of Gardeners World magazine.

About not having the frontage spotless and every piece of litter within 500 yards collected and disposed of.

I’m talking about actually putting the car in the garage instead of leaving it on the drive.

I’m talking about having hidden security instead of a highly visible system that screams there’s something worth stealing inside, most people who break into homes can bypass such systems anyway.

Here you can find a lot more tips to defend your home.

Should we face a total collapse hiding in plain site will need to be elevated to an art form. In such a situation much of the UK will carry on regardless, keeping their gardens neat, pretending all is normal, burying their head in the freshly dug soil and hoping the problem will go away.

Perish the thought that litter may collect on the drive, a bit of broken glass may not be swept up, the police don’t come when you call them…or the fire service…or the paramedics. Never mind, put the kettle on and we’ll all feel better after a cup of tea!

99.9% of the population of the UK do not have a clue just how bad life can get in the event of a collapse. This is quite simply because they do not accept the possibility of collapse. Most have no clue of the havoc a solar flare can bestow on the planet, I would be challenged to find a regular Joe in the street who even knows what an  EMP is.

As such, the talk of survival groups et al makes someone like me rather sad, it’s highly unlikely that we will be part of one due to the mindset of the vast majority of the population thinking anyone with such a mindset is an out and out lunatic.

So what is a prepper to do?

Keep on going and try and raise awareness when and where you can is about all you CAN do.

I ask  if the bridge closes “What on Earth would we do with no deliveries getting through?” That one elicited a minor panic as the bridge has only closed a few times in the past 30 years and therefore is not on the radar as a problem…normalcy bias at it’s best.

On the upside, a higher than average proportion of people here grow a good amount of their own food, bartering potatoes for carrots as an example is an accepted way of life here. Many raise chickens and there are several good sized farms on the island, all with livestock. In the first instance, early on in a collapse, this is a far better place to be than the vast majority of locations in the UK.

How we would fare further on into a collapse situation…who knows, but it would be dead easy to block that bridge to prevent, or at least impede people getting onto the island, and if people have the balls for it, there’s enough shotguns to prevent them doing much of anything when they do arrive…