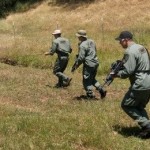 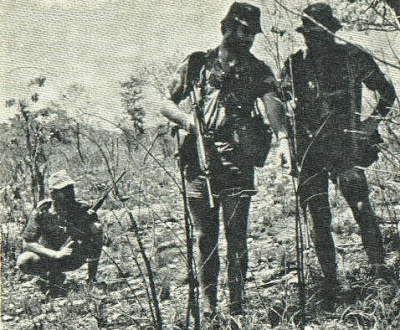 So, if you are being tracked you must move unpredictably and change direction or this will allow a hunter-killer force to move, by road or helicopters, cut-off groups onto your path where they will set up ambushes to trap and kill/capture you.
One thing you can consider if you are being tracked is the use of booby traps, if you have them pre-prepared. If you have grenades, then it takes a moment to attach one to a tree, tie a tripwire to the pull-ring/pin, stretched across the trail. You may even be able to use a stolen flashbang to do the same – it won’t be lethal, but it may put off dogs. If you are able to disrupt the pursuit in such a way, along with splitting your groups into smaller elements, then you have a good chance of getting away. They may end up following one pair or individual, and they may be caught or killed, but that is better than losing the whole team.
Aerial Thermal Surveillance: I have written about this in depth. It would be useful to know if the enemy has these assets and how quickly they can deploy them, for example getting a police tracker helicopter or a drone up above you. There are two important aspects to this, sort of a conundrum:
Mobile: if you are moving, which you will have to be if you are trying to get away from a tracker team, then you cannot go static and use methods such as getting in a culvert, or deploying a thermal tarp. Such an action will simply allow the tracker team to close right on top of you, and then you are likely trapped and in a fight. The best you can  do when moving in such a way, if there is aerial thermal surveillance, is to use terrain and vegetation masking. This, again, is a balance. It means getting some terrain between you and the sky, and trying to get under the canopy of the trees. However, if you get into a deep ravine, for example, to avoid a drone, then if you continue to follow it you are being predictable and you may well then run into an ambush in the ravine. The best thing to do is use terrain/vegetation masking as best as possible to confuse the operator, not the technology. These devices are not infallible, even though the technology itself is excellent – if the operator loses a visual on you, and you are moving away masked by terrain/vegetation, he will have to scan the area to try and pick you up again. The field of view is not huge so that is harder than you may think. Its not going to work where there is no terrain or tree canopy, like in the desert.
Static. If you can get away from the ground pursuit, then you have a chance of holing up and hiding. Get into a place where you can use terrain masking, like in a cave or overhang, deploy a thermal tarp etc. This will disguise you from aerial thermal surveillance so long as they were not tracking you to where you stopped, and there is not a ground team hot on your trail.
Hasty Ambush: I am really painting you a worst case scenario, with a hunter-killer force, aerial drones and ground tracker dogs all on your tail. Reality is often less perfect, and as I am fond of saying, you will survive in the gaps and the mistakes of the enemy, the lack of assets etc. But let’s take this full circle, to the initial assumption – you are an armed four man resistance team that is being tracked away from where you were compromised. If you get to a point where you are being boxed in and there is no escape, then your option is to fight 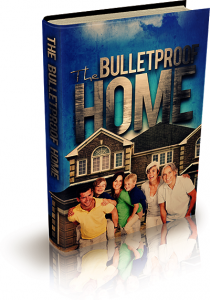 The hasty ambush can be an option of last resort – or it could be an option that you throw in during the pursuit, before perhaps splitting your teams down and moving off in different directions in the confusion. Remember that to conduct a hasty ambush, you have to let the tracker team get close, so you lose any lead you had. You do the hasty ambush by first breaking track and doubling back to cover your track by fire. This means that the tracker team will follow your track until the point at which you broke track. By the time they realize that you broke track, they are already in your killing area and you probably already initiated the ambush. Kill the tracker team, both dogs and personnel, and then break contact in the confusion. You may also want to split your team up at that point.
Remember, if you manage to kill the dogs, then you have a chance of moving off and getting holed up in a hiding spot, because there are no longer any dogs to track you. You are then only vulnerable to a detailed ground sweep (or FLIR), so make sure you move far enough away to find that good hiding spot to lay up in until the fuss subsides.
If you run into a main force of pursuers, then you will have to try and break contact and move out. If they have you boxed in, you will have to fight. At this point if they have Close Air Support or Indirect Fire (mortars, artillery) assets, then you should try and keep them close so they can’t use this against you, until such point as you identify an out and can break contact in that direction.
If you have already split down into pairs or individuals, you can still run the hasty ambush using the same principles: double back and hit them on your trail before breaking contact. Use terrain to your advantage.
Remember, if you are conducting resistance style operations and you find yourself in this worst case position, then a very real outcome is that you will die. You knew that when you took it on, right? Do the best  you can while you can, never give up, always keep fighting; if it happens that a round goes through your skull, it’s too late anyway.
And you never know, if you fight like a grizzly, you may actually win, against McDonald’s fed fat-ass militarized goons. If your small team tactics are good enough.
To read more scenario based info on this

One Reply to “When They Are Hunting You”