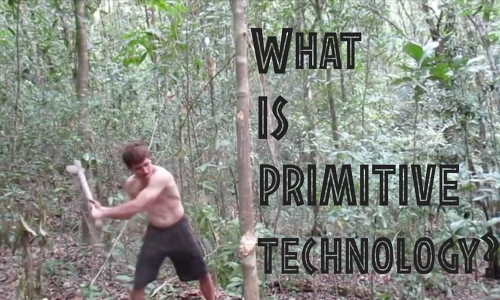 This article was originally published by George Pierpoint on www.bbc.com

What is ‘primitive technology’?

Primitive technology is a genre of YouTube videos that demonstrate – usually over the course of about 15 minutes – how to build things without any influence from the modern world.

This is distinct from the “prepper” movement, which focuses on stockpiling weapons and resources in anticipation of the breakdown of society.

Primitive technology is more than just survival skills. It’s like hitting the reset button and seeing how advanced you could become if left to fend for yourself.

Need an axe? Make one from a stone and a branch. Need a pot? Mix your own clay and make a kiln. Need to crush some rocks? Make a water-powered hammer.

From Robinson Crusoe almost 300 years ago to Tom Hanks in the film Cast Away, the idea of surviving alone in the wild still captures the imagination of many.

Primitive technology videos regularly receive millions of views and have spawned an active online community who discuss the latest videos.

The trend seems to have begun with the eponymous Primitive Technology YouTube channel, established in 2015.

The channel has had more than 600 million views, with the most popular individual video having been viewed more than 54 million times.

The video shows a man in blue shorts – known as “The Man” – silently constructing a hut with a tiled roof and, in a flourish of ingenuity, under-floor heating.

Who is the man in the blue shorts?

The man in the blue shorts is John Plant, from Queensland, Australia.

Mr Plant is the superstar of the primitive technology world and the most successful YouTuber on the subject.

“I started when I was about 11, making a small hut from stone and wood in the creek behind my house.”

After graduating from university, Mr Plant found himself mowing lawns for a living.

When he wasn’t working, he would head into the woods and practise his hobby.

Then he began to film his projects.

He now makes a living from the revenue raised from his YouTube channel.

Known for years as “The Man”, Mr Plant’s identity was revealed when he complained to Facebook that he was losing revenue as his videos were being shared without proper attribution.

“By limiting the resources to only what is available in the wild, you become more inventive,” he tells BBC News.

And his favourite project was a “centrifugal blower” because “no-one thought of making one from scratch before”.

Reflecting on why his videos are so popular, he suggests his fans appreciate that he doesn’t “waffle like other YouTubers”.

“I get straight into the project instead of wasting the viewer’s time.”

Alongside his YouTube channel, Mr Plant details his projects in a blog.

Mr Plant says that he enjoys “exchanging knowledge” with people and often has in-depth exchanges with viewers about the relative merits of materials and methods.

However, he says that a common misconception is that he “lives in the wild full-time”.

Mr Plant is keen point out that he “lives in a modern house and eats modern food”.

He says that he is not fazed by the immense popularity of his videos.

“I used to practise primitive technology for years with no-one watching. The only difference now is I have to set up the camera and tripod before I perform each task.”

And as for advice for any aspiring primitive technologists? He suggests start by learning to make fire.

“It’s the most important skill and the basis for most technology.”

Why do we love it?

Art Markman, professor of psychology at the University of Texas, says: “There are two aspects to the appeal of creating things without help.

“One is that most of us realise that we could not survive without the collective work of many strangers.

“The second is that we live in times of uncertainty.

“There is a lack of faith in government institutions and when you distrust institutions you may want to be able to do things for yourself, which can add to the appeal of this kind of self-reliance.

“The human mind isn’t just built for thinking, it is built for controlling the body. Unfortunately, many of us spend more time thinking than doing.

“Watching videos of people building things creates an increased desire for people to build things themselves.

“This phenomenon is called ‘goal contagion’.

“When the task seems doable – as instructional videos are designed to do – it increases the likelihood people will want to engage in the activity.

“These videos tap into that desire.”

The huge popularity of Mr Plant’s Primitive Technology channel has spawned a number of other similar channels.

The Primitive Skills channel details the projects of Huy Dong in rural Vietnam.

Mr Dong’s videos have been viewed more than 32 million times and utilise the naturally occurring materials in Vietnam.

In a series of videos, Mr Dong demonstrates how to build rice paddies by using bamboo to funnel water from a waterfall to flood an area of excavated land.

Beyond YouTube, online communities have developed around these videos.

On Reddit, the /r/PrimitiveTechnology community has more than 26,000 subscribers.

This sub-Reddit is an active and supportive forum for fans to share advice, achievements and analyse the latest additions to the primitive technology canon.

Jordon – known on Reddit as CavemanTechSupport – is one such fan.

He says after seeing Mr Plant’s videos he “fell in love with the idea of creating something so cool with nothing but your environment”.

Reflecting on the appeal of these videos, Jordon says: “Most of us do not wish to go back to the stone age but simply to remind society of a simpler time when a person could go out and live with nothing but their mind and nature.

“The things we make ground us and tie us to a world which is always drifting towards the artificial.”

11 Replies to “What is ‘primitive technology’ and why do we love it?”