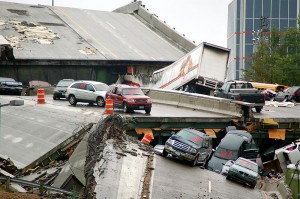 Can you guess what the number one catastrophic event that Americans worry about is?  There are certainly many to choose from.  Many Americans are deathly afraid of a major terrorist attack.  Others live in constant fear of natural disasters such as earthquakes, volcanoes and hurricanes.  Still others are incredibly concerned that a massive pandemic will break out at any time or that World War III will erupt in the Middle East.  Yes, there are certainly a lot of potential catastrophic events that one can worry about in the times in which we live, but the number one catastrophic event that Americans worry about is actually “economic collapse“.  At least that is what a recent survey conducted by Leiflin Inc. for the EcoHealth Alliance found.  But this goes along with what so many other polls have found over the past few years.  Over and over again, opinion polls have found that the number one issue that American voters are concerned about is the economy.  The truth is that average Americans are deeply, deeply concerned about unemployment, debt, the housing crash and the steady decline in the standard of living.  It has been years since the U.S. economy has operated at a “normal” level, and many Americans are afraid that things could soon get a whole lot worse.

In the new survey mentioned above, those contacted were asked to select the top three potential catastrophes that worry them the most.

The following results come directly from the survey….

As you can see, “economic collapse” was the winner by a wide margin.

So are there good reasons for the American people to be concerned about an economic collapse?

Of course there are.

Back in 2008, a financial crisis that began on Wall Street was felt in the farthest corners of the globe.

This time, ground zero for the financial crisis is going to be in Europe. The euro continues to drop like a rock, and banking stocks continue their long-term decline.

Many people expect a “financial collapse” to happen on a particular day.  But that is not how it happens usually.  Instead, it is often like a snowball that starts rolling downhill very slowly at first but that eventually become a huge avalanche.

Right now, we are seeing the financial world come apart in slow motion.  A recent article posted on Automatic Earth included a list of the year-to-date performance of some of the most prominent global banking stocks.  These numbers are absolutely staggering….

But because these numbers happened over the course of a year and not on a single day it doesn’t feel quite as much like a “collapse”.

Unfortunately, things are about to get a whole lot worse.  Global credit markets are really freezing up – especially in Europe.

Considering the fact that the entire global financial system is based on credit and debt, that is a very bad thing.

Our system simply does not work when banks do not want to lend money to each other or to businesses.

There was an article in the Guardian that talked about how it looks like the credit crunch may be getting even worse….

“If European banks are still this concerned, it’s not a good sign,” said Karl Schamotta, senior markets strategist with Western Union Business Solutions. “That underlines the possibility that this liquidity crunch is getting worse and will continue into the new year.”

When banks cut back on lending, that causes the money supply to shrink.  When the money supply shrinks substantially, it is almost impossible to avoid a recession.  Ambrose Evans-Pritchard detailed how the money supply in many eurozone nations is shrinking at a very rapid pace right now….

While real M1 deposits are still holding up in the German bloc, the rate of fall over the last six months (annualised) has been 20.7pc in Greece, 16.3pc in Portugal, 11.8pc in Ireland, and 8.1pc in Spain, and 6.7pc in Italy. The pace of decline in Italy has been accelerating, partly due to capital flight. “This rate of contraction is greater than in early 2008 and implies an even deeper recession, both for Italy and the whole periphery,” said Mr Ward.

Those are very, very frightening numbers.

About the only thing propping up European banks right now is the fact that the European Central Bank is loaning them gigantic piles of cheap money.

But there is a big problem.

European banks are running out of collateral for those loans as an article in the Wall Street Journal recently noted….

Even after the European Central Bank doled out nearly half a trillion euros of loans to cash-strapped banks last week, fears about potential financial problems are still stalking the sector. One big reason: concerns about collateral.

The only way European banks can now convince anyone—institutional investors, fellow banks or the ECB—to lend them money is if they pledge high-quality assets as collateral.

Now some regulators and bankers are becoming nervous that some lenders’ supplies of such assets, which include European government bonds and investment-grade non-government debt, are running low.

So what happens when banks all over Europe start running out of collateral and can’t get any more loans?

The answer should be obvious.

As I detailed a few days ago, many prominent voices in the financial world now believe that we could be looking at a financial crisis that will be even worse than 2008.

If you want to see what happens when a collapse happens and a depression begins, just look at what is happening in Greece….

*100,000 businesses have been closed since the beginning of the crisis.

*About a third of the nation is now living in poverty.

*The unemployment rate for those under the age of 24 is 39 percent.

*The number of suicides has increased by 40 percent in the past year.

*Thefts and burglaries nearly doubled between 2007 and 2009.

Things have gotten so bad that hundreds of families in Greece are abandoning their children.

Some are taking their children to charitable institutions and others are handing them directly over to the government.

The following sad story of one Greek family comes from an article in the Guardian….

“Psychologically we were all in a bit of a mess,” said Gasparinatos. “We were sleeping on mattresses on the floor, the rent hadn’t been paid for months, something had to be done.”

And so, with Christmas approaching, the 42-year-old took the decision to put in an official request for three of his boys and one daughter to be taken into care.

“The crisis had killed us. I am ashamed to say but it had got to the point where I couldn’t even afford the €2 needed to buy bread,” he told the Guardian. “We didn’t want to break up the family but we did think it would be easier for them if four of my children were sent to an institution for maybe two or three years.”

Does that seem shocking to you?

Well, all of this is coming to America eventually.

Someday we will see American parents abandoning their children because they cannot take care of them anymore.

Someday we will see suicides absolutely skyrocket in America because people have lost all hope.

Someday we will see thefts and burglaries soar to unprecedented heights as millions of desperate people attempt to try to find some way to survive.

It is all coming.

The federal government cannot pile up a trillion dollars of additional debt every year indefinitely.

We cannot afford to see an average of 23 manufacturing facilities a day in the United States shut down.  Eventually there won’t be anymore factories to shut down.

We cannot afford to keep putting millions more Americans on welfare.  At this point the government is feeding 46 million Americans a month.  Will the government eventually be feeding most of us?

There is no way that things are going to be okay if we stay on the path that we are currently on.

So the truth is that Americans should be very concerned about an economic collapse.

It is coming and it is going to be very painful.

By Michael Snyder from The Economic Collapse Blog