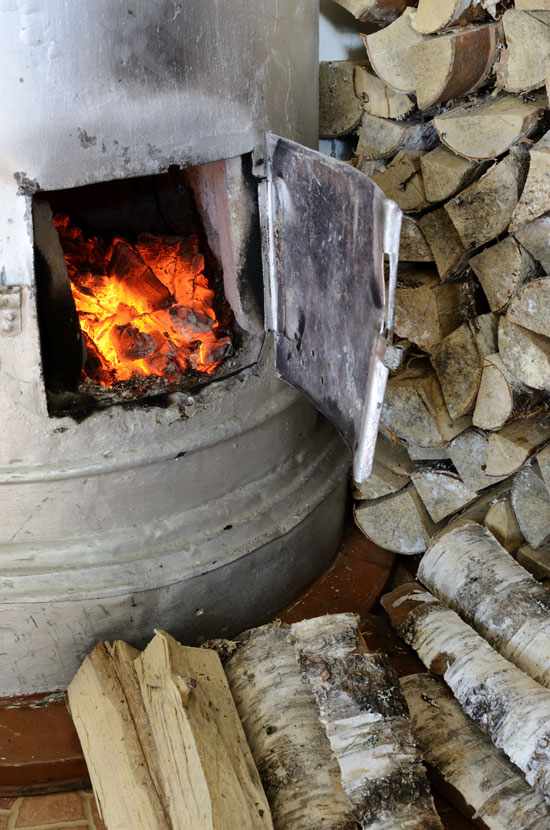 Although heating with wood is not for everyone, those who are willing to gather, chop and season their own firewood can significantly reduce the cost of energy during winter.

Environmental Impact of Heating with Wood

Wood is not a perfect fuel, but does such a thing exist? All energy generation and consumption by nature creates unwanted by-products, and impassioned arguments about the legacies of coal and uranium mining and natural gas and oil extraction are ongoing. Even famously “clean” energy sources like wind and solar power have been found to have a detrimental impact on the environment.

The biggest drawback and major environmental impact of wood burning is, of course, visible for all to see—wood-smoke pollution. Three aspects of this pollution are discussed and debated, sometimes hotly: nuisance smoke (caused by neighbors inefficiently heating their homes); air-shed contamination (caused by too much smoke produced in areas with a depressed topography, such as a river valley, which is prone to temperature inversions in the winter that trap smoke close to the ground); and indoor air pollution (caused by leaky or inefficient in-house wood-burning appliances).

There is no getting away from the fact that burning wood produces smoke, which is unhealthy to breathe in high concentrations. Even in low concentrations, it can be harmful to children, the elderly and people with lung diseases or allergies. Those who would like to curb wood burning in some communities point out that wood smoke contains toxic chemicals like polycyclic aromatic hydrocarbons and dioxins as well as known carcinogens such as furans and acrolein. This despite the fact that a poorly fired backyard barbecue or a city bus can emit equally noxious substances.

The good news is that the new wood-burning technology built into today’s certified stoves goes a long way toward addressing all three aspects of wood-smoke pollution. Thanks to the four decades of research since the 1970s oil crisis, we know a great deal more about wood burning. Advanced-technology stoves, inserts, fireplaces and furnaces can reduce wood smoke by up to 90 percent when compared with older, so-called airtight stoves.

For example, older woodstoves emit, on average, at least 25 grams of smoke per hour of operation (g/h), while the emissions from older wood-fired outdoor boilers can range between 50 g/h to 100 g/h. In contrast, both U.S. Environmental Protection Agency (EPA) regulations and the Canadian Standards Association’s Performance Testing of Solid-Fuel-Burning Heating Appliances (CSA B415.1) limit emissions of certified non-catalytic wood-burning stoves to no more than 4.5 g/h. Since these regulations were first established in 2000, the average emissions of certified stoves have declined steadily due to advances in technology and healthy competition between manufacturers. Many woodstove models on the market today emit only 2 g/h to 4 g/h. 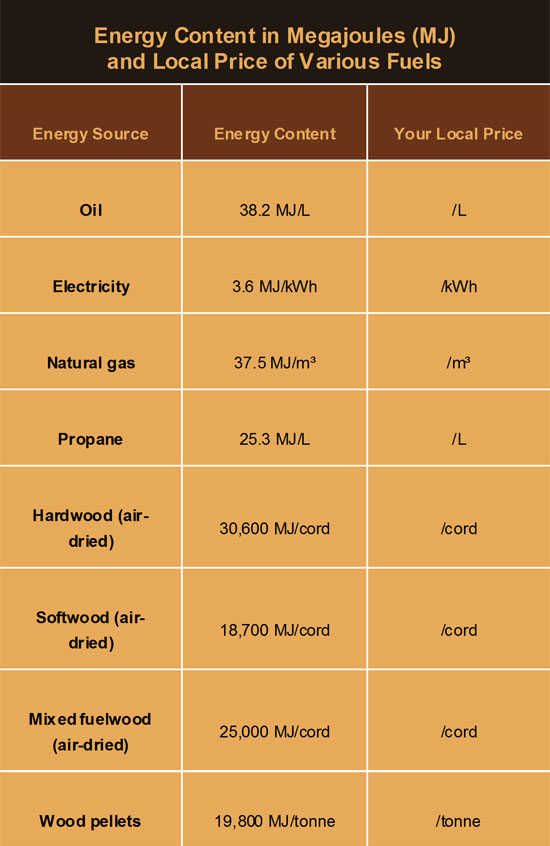 The energy content inside of one cord or tonne of wood is significantly greater than what is contained within one kilowatt-hour, cubic meter or liter.

By burning and not wasting the energy-rich smoke, these stoves increase the efficiency of providing heat to the home. Older stoves were grossly inefficient, with efficiency rates as low as 35 percent for a cast-iron box stove to 55 percent for a so-called airtight model in the 1970s. CSA- and EPA-certified woodstoves spill less smoke into the indoor air because fires don’t tend to smolder in them, with the average being around 70 percent efficient. Even the new breed of emissions-certified outdoor boilers are much more efficient.

This efficiency translates directly into less smoke going up the flue and minimizes the telltale gray clouds billowing from chimneys. Multiply that across a small community of wood-burning homes, and both nuisance smoke and air-shed contamination are taken care of in one stroke.

Sustainability of Heating with Wood

As for deforestation, large parts of Canada and the northern United States are relatively thinly populated and have highly productive forests. These are the regions where wood heating makes sense. Foresters have claimed wood burning could double in most of these regions without unduly straining forestry resources, as long as selective harvesting is used to thin dense stands and remove poor-quality trees, and seed trees of a wide variety of species and ages are left standing.

Indeed, the careful work by generations of farmers and other woodlot owners, visible in healthy, productive woodlots that have consistently produced wood for home heating, provides a blueprint for stewardship that the entire forest industry can follow.

It has often been said that a healthy, well-managed woodlot can yield a cord of wood per 2-1/2 acres (1 ha) per year forever and that a 12-acre (5 ha) woodlot could sustainably produce enough firewood each year to fully heat a house. While true as a rule of thumb, it needs a little updating. It takes a lot less than 5 cords of wood to heat a new energy-efficient house using a modern wood-burning stove. Indeed, with the efficiency offered by today’s wood-burning appliances, additional homes could be heated from the same woodlot.

Yet despite its considerable advantages, firewood is not the magic bullet that will solve the problems of global warming. Heating with wood is not a meaningful option for all homes, such as multi-family dwellings in urban downtown cores, where regulations forbid it and where the air is already choked with pollution from industry and transportation. Finally, as we mentioned earlier, a winter’s worth of wood takes up a lot of space, and feeding fires all winter requires a heightened level of physical fitness and attentiveness. Clearly, wood heating is not for everyone.

But for those who live outside major cities, in small towns and rural areas, where both population density and the cost of firewood are lower, and for those who are looking to offset their monthly home-heating bill and provide some nostalgic warmth in the bargain, it just might be worth honing up on your chopping, stacking and kindling skills.

The Relative Efficiency of Heating with Wood

Firewood is typically consumed in three ways: It is burned in a decorative fireplace; it is used as a supplementary energy source to heat a basement, a family room or an extension to the house; or it serves as a primary heating source. The first is likely to occur in cities, the second is the largest segment of wood use for home heating, and the third is commonplace in rural areas.

If you are considering the second or third scenario, you may well ask whether wood heating is really economically viable in this day and age. The quick answer is yes. Dollar for dollar, wood burning is a cheaper way to heat your home than are conventional fuel sources such as oil, natural gas and electricity. Exactly how much cheaper depends on the type of home you want to heat, where you live and the local cost of various fuel types.

These models serve as a rough guide only and address heating the entire house to an even temperature throughout. Maybe you want to heat just a single room with a woodstove. Even in that case, switching to wood burning could reduce the energy needed to heat this room by as much as 25 percent.

Related Article: The EPA Takes an Ax to Self-Sufficiency: Most Woodburning Stoves Will Soon Be Illegal

The real answer, however, is more complex and lies in how willing you are to adopt a wood-burning lifestyle. Monetary costs are only the beginning. Heating with wood is hands-on, intensive and messy. Consider the following questions before you decide. Do you have the space outside to cover and store a winter’s supply of firewood? Do you have space inside your house to accommodate a few days’ supply in anticipation of those winter storms that close down the roads? Do you have the physical strength and stamina required to split, move and stack firewood on a regular basis? Do you have time to devote to managing your newfangled fuel supply, tend fires and deal with new maintenance tasks like hauling out ashes? Can you put up with wood chips scattered throughout your house?

If your answer to these questions is, for the most part, yes, then you have what it takes to make the switch.

The Value and Satisfaction of Heating with Wood

Heating with wood is about a lot more than warming your home. It is a tangible expression of self-reliance, of the courage it takes to buck the trends and resist the lure of a sedentary, always-connected existence. Producing fuel to heat the family home during a long, cold northern winter is an accomplishment with significant meaning for those who are up to the task. The sense of personal commitment to social and environmental responsibility it can provide is powerful but rarely seen in the mainstream media, where bike marathons for charitable causes rule the day. Heating with wood will teach you more about the ethical cause-and-effect relationships of energy production and consumption than simply paying a utility bill. Heating with wood reinforces links to the land and represents a willing submission to the cycle of the seasons. It provides stability and security in a turbulent world.

2 Replies to “Save Money During the Winter: Sustainability of Heating with Wood”