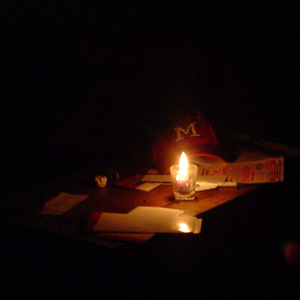 As air conditioners work hard to battle this hot summer and disasters lurk around the corner, prepare your home for a possible blackout before it arrives.
Summer is blackout season, when heat waves bring on extra air-conditioning use, and extra air-conditioning use taxes the power grid and leads to rolling blackouts. And while the power grid in the U.S. is relatively stable—99.9 percent stable if you factor out weather-related outages, according to the Electric Power Research Institute—power outages are a year-round fact of life.

A growing population, along with more homes that cover more area, has meant that hurricanes, wildfires, and other disasters impact more people and have led to a staggering increase in power outages. According to Dr. Massoud Amin, a professor of electrical and computer engineering at the University of Minnesota, 500,000 people per day in the U.S. lose power for at least two hours. Between 2005 and 2010 there were 272 power outages that each affected more than 50,000 people. In 2011 alone there were 136 weather-related power outages that snuffed out 178 million meters. The economic toll is equally intense, costing between $80 billion and $188 billion annually.

What’s a homeowner to do? For one thing, stay calm. While the frequency of power outages is increasing, utilities have become relatively good at restoring power. According to a study by the AP after last year’s superstorm Sandy, 95 percent of utility customers who lost power in New York had it restored within 13 days—11 days for New Jersey. Following Katrina in 2005, it took utilities 23 days to restore electricity to just 75 percent of the power-out population in Louisiana. The reality is that except in extreme cases, you’ll be back up and on the grid within hours or a few days. But what if you’re not?

Get backup power. Small, portable generators of varying quality that will supply 2000 to 10,000 watts of backup power can be had for as cheap as $200, or up to $2500 or more if you need a top-of-the-line unit. For a quick-and-dirty fix to keep the power on, it’s possible to run heavy-duty extension cords right from a generator to your appliances.

But if you do this, be very careful. One of the biggest killers after disasters is carbon monoxide (CO) poisoning, which can happen when people put their portable generators too close to their homes. Be sure to position a generator far away from any air conditioning units (or other vents or windows)—they’ll suck in the CO.

One study by the Centers for Disease Control and Prevention showed that half of all non fatal CO poisonings during two recent hurricane seasons came from generators positioned less than 7 feet from houses. Keep your portable generator at least 10 feet from your home. And 25 feet is better: A research report from the National Institute of Standards and Technology (NIST) showed that generators 15 feet away could still spew CO into a house with open windows.

The usual warnings about water apply. If you have advance warning of a natural disaster, stock up on drinking water or fill every available sink, tub, and bucket with water in case the supply is cut off. For immediate drinking-water needs, lay in a three-day supply—a gallon per person per day. To disinfect clear water, add 1/8 teaspoon of unscented bleach per gallon, stir and let sit for 30 minutes, and store it in a clean container.

Make sure you go through the things that will spoil first. So raid the fridge, and don’t open the freezer unless you absolutely have to—it’ll stay cold longer after a blackout if you don’t let the cold air escape. Once the fridge is empty, fire up your outdoor grill and eat that frozen hamburger and anything else in the freezer. From there, work your way through canned food like beans and corn—it doesn’t even need to be heated. If you’ve got access to water, then raid your pantry for things like pasta, rice, and dried beans. For more, check out The Lost Ways.

If things are getting a little hairy, remember you can always hit the road. Just be sure to do so at the right time. In the case of disasters such as hurricanes or wildfires that give advance warning, evacuate when ordered to. Otherwise, keep the roads clear for people who have been ordered to leave. You’ll have time to leave once they’re gone.

When you’re ready to roll, pack in the family, grab some spare clothes, turn on the radio for information, crank the a/c and drive to where there’s power—a cousin’s house, a motel, whatever. Remember, you can also use your vehicle as a backup generator. Many cars these days, like my Honda Odyssey, have a standard two-prong 120-volt socket that can even be used to power small appliances.

One Reply to “Surviving the Inevitable Summer Power Outage”