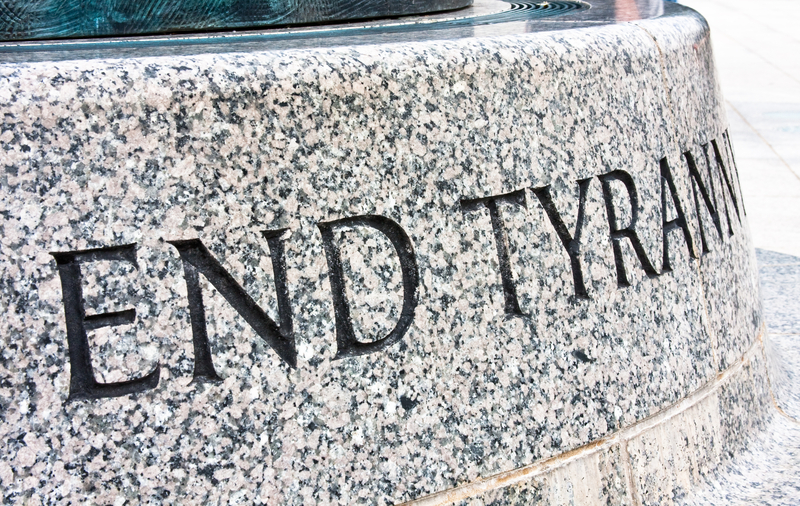 Individual liberty and free markets are essential components of any lasting society. The problem is that these precious gifts are always in danger of slipping through our fingers. Tyranny is always crouching outside the door, fangs bared, ready to shed blood and create slaves.

When most people think of “tyranny” it brings to mind images of days long gone when kings and aristocrats sat on thrones and ruled their subjects with a cruel, iron fist. While part of that image is accurate, the fact of the matter is that “tyranny” rarely ever looks like tyranny.

Take Hitler for example. He was a very charismatic leader who convinced people to vote him into power. Hitler was able to con an entire nation into believing he had their best interest at heart. He didn’t look like a tyrant, a greedy self-serving king bent on ruling the world. But that is exactly what he wanted to be.

People often wonder when they should begin keeping an eye out for tyranny. While there are a few warning signs that things are about to go horribly wrong, the truth is we should always be keeping a watchful eye for tyranny. Here are three signs that tyranny is right around the corner.

A Shift From Individual Freedom to Collective Utopia

The first sign that tyranny is on the prowl does not come in the form of oppressive laws, but through a shift in cultural and societal thinking. The focus will turn from preserving individual liberty and free markets, to a more collective way of thinking.

The government then slowly turns away from its true purpose as a protector of individual liberty, and instead starts to act like a clingy parent.

It will try and tell people that the government knows what is truly best for them, and will make laws to try and force members of society to be morally perfect. According to their own set of criteria, of course.

Socialism and Communism have always started out with the best of intentions. An attempt by the government to redistribute wealth so that those who “have” are sharing equally with those who “have-not.” It sounds beautiful in theory.

However, all this truly does is give the government all of the power to call the shots, which always ends in the oppression of a people group.

One of the big signs that tyranny is coming quickly is the redistribution of wealth. This again goes back to the idea of leveling the playing field. This is where the government creates additional taxes for those who are wealthy, to fund programs that financially support the poor.

The problem with this way of thinking is two-fold. If you tax the wealthy too much, they slowly run out of money and cannot afford to keep their business open. This means that people lose jobs, so the number of individuals in the “poor” group continues to grow until there aren’t enough wealthy people left to support them. It destroys an entire economic group.

As the old saying goes, “The problem with socialism is that you eventually run out of other people’s money.”

The other problem is that forcing someone to be charitable creates resentment and takes away the incentive to do good works. It’s a given that as human beings we should care about each other, and seek to help one another from a loving heart.

When the government tries to legislate this type of fairness it undermines the free market and destroys charity. Redistribution of wealth is the first step in practically applying the collective utopian way of thinking.

The third sign that things are about to hit the skids is when the government begins to slowly strip individual rights from people in favor of protecting the collective.

This is usually first seen in limiting freedom of speech. The freedom to speak openly and express your personal opinions is the cornerstone of a free society. It is what allows the common man to keep the government in check, which is why it is usually the first thing an oppressive government wants to eliminate.

Many of the laws that strip away freedom of speech start out seeming like a positive thing. Preventing someone from saying degrading things about another human based on their color, sex, or religion is a good thing, right? In theory, yes, but unfortunately, the list of “offensive” words soon grows so large that a person cannot express an opinion that goes against the status quo without fear of government retribution.

Another right that tyrannical governments gleefully strip away is the right to own a firearm for personal protection.

The government may say this is to help protect people from gun violence, but all it really does is leave people vulnerable to crooks and the politicians who are claiming to protect people. It creates ripe conditions for a dictator to move in unopposed, since the common man or woman would have no means to stop them.

These are just a few of the major warnings that should tip you off to bad things on the horizon. It’s critical that if liberty and freedom are to continue, we all must be diligent in keeping watch for tyranny.

Otherwise, our children and grandchildren may grow up imprisoned in a tyrannical society, never knowing the freedom we enjoy today.

Find out more about survival techniques on Conquering The Coming Collapse.

By MICHAEL CANTRELL, from Survivopedia.com