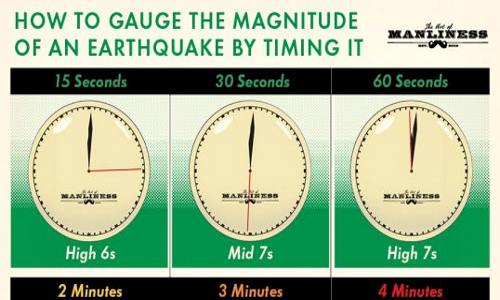 This article was originally published by Brett & Kate McKay on www.artofmanliness.com

Scientists measure the magnitude of earthquakes by using sensitive seismographs that record the vibrations that move through the earth.

But did you know that the average person can roughly gauge the magnitude of an earthquake simply by timing how long it lasts?

I picked up this fascinating bit of know-how from Kathryn Schulz’s engrossing, terrifying, Pulitzer Prize-winning article on the earthquake, and subsequent tsunami, that will almost assuredly one day devastate a wide swath of the Pacific Northwest. 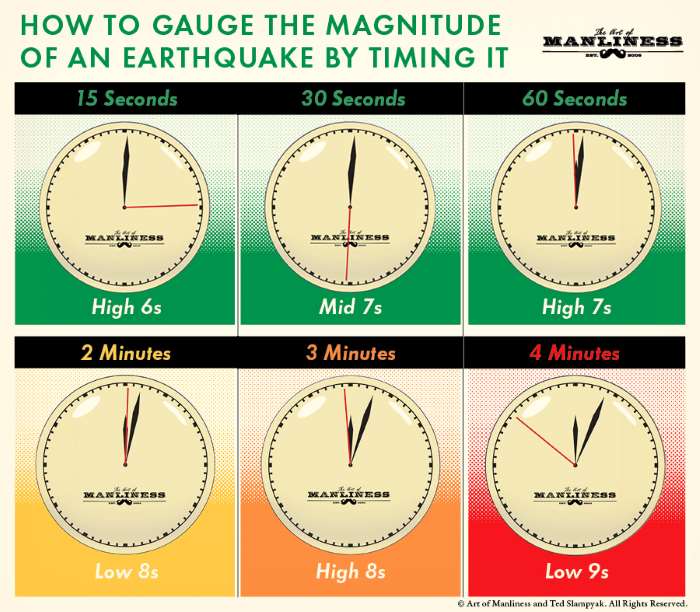 How will you survive when there is no doctor around?

The introduction to the article offers a compelling look at how this rule of thumb works in practice:

“When the 2011 earthquake and tsunami struck Tohoku, Japan, Chris Goldfinger was two hundred miles away, in the city of Kashiwa, at an international meeting on seismology. As the shaking started, everyone in the room began to laugh. Earthquakes are common in Japan—that one was the third of the week—and the participants were, after all, at a seismology conference. Then everyone in the room checked the time.

When Goldfinger looked at his watch, it was quarter to three. The conference was wrapping up for the day. He was thinking about sushi. The speaker at the lectern was wondering if he should carry on with his talk. The earthquake was not particularly strong. Then it ticked past the sixty-second mark, making it longer than the others that week. The shaking intensified. The seats in the conference room were small plastic desks with wheels. Goldfinger, who is tall and solidly built, thought, No way am I crouching under one of those for cover. At a minute and a half, everyone in the room got up and went outside.

It was March. There was a chill in the air, and snow flurries, but no snow on the ground. Nor, from the feel of it, was there ground on the ground. The earth snapped and popped and rippled. It was, Goldfinger thought, like driving through rocky terrain in a vehicle with no shocks, if both the vehicle and the terrain were also on a raft in high seas. The quake passed the two-minute mark. The trees, still hung with the previous autumn’s dead leaves, were making a strange rattling sound. The flagpole atop the building he and his colleagues had just vacated was whipping through an arc of forty degrees. The building itself was base-isolated, a seismic-safety technology in which the body of a structure rests on movable bearings rather than directly on its foundation. Goldfinger lurched over to take a look. The base was lurching, too, back and forth a foot at a time, digging a trench in the yard. He thought better of it, and lurched away. His watch swept past the three-minute mark and kept going.

Oh, shit, Goldfinger thought, although not in dread, at first: in amazement. For decades, seismologists had believed that Japan could not experience an earthquake stronger than magnitude 8.4. In 2005, however, at a conference in Hokudan, a Japanese geologist named Yasutaka Ikeda had argued that the nation should expect a magnitude 9.0 in the near future—with catastrophic consequences, because Japan’s famous earthquake-and-tsunami preparedness, including the height of its sea walls, was based on incorrect science. The presentation was met with polite applause and thereafter largely ignored. Now, Goldfinger realized as the shaking hit the four-minute mark, the planet was proving the Japanese Cassandra right.

For a moment, that was pretty cool: a real-time revolution in earthquake science. Almost immediately, though, it became extremely uncool, because Goldfinger and every other seismologist standing outside in Kashiwa knew what was coming. One of them pulled out a cell phone and started streaming videos from the Japanese broadcasting station NHK, shot by helicopters that had flown out to sea soon after the shaking started. Thirty minutes after Goldfinger first stepped outside, he watched the tsunami roll in, in real time, on a two-inch screen.

In the end, the magnitude-9.0 Tohoku earthquake and subsequent tsunami killed more than eighteen thousand people, devastated northeast Japan, triggered the meltdown at the Fukushima power plant, and cost an estimated two hundred and twenty billion dollars. The shaking earlier in the week turned out to be the foreshocks of the largest earthquake in the nation’s recorded history.”