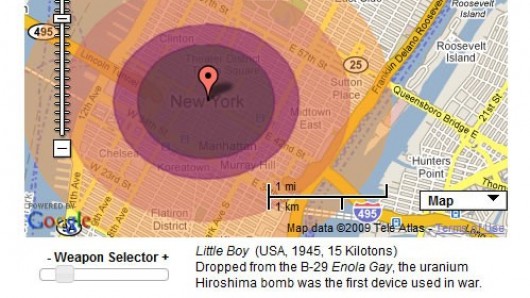 The image above is the thermal effects of the ‘Little Boy’ nuclear bomb if it was dropped on New York City.

Not that it’s particularly likely, but as long as nuclear bombs exist, there’s the chance – however slim – that one might go off somewhere near you. This little Google Maps overlay might be a bit morbid, but it’s also pretty fascinating. It shows you the heat, pressure and fallout spread of a range of different nuclear bombs detonating anywhere in the world. It’s particularly sobering to get a sense of the scale of the devastation caused by the Hiroshima and Nagasaki bombs in World War 2 – and then see how tiny those bombs are compared to the USSR’s enormous Tsar Bomba, the biggest nuke ever detonated.

The nuclear arms race might be over between the USA and USSR, but there are still something like 8,000 active nuclear warheads out there ready to unleash absolute hell if somebody pushes the red button.

India, Pakistan and North Korea have all declared nuclear stockpiles. Israel hasn’t declared them but is widely believed to have more than 150 nukes secreted around the state. Iran and Syria have been accused of working towards nuclear weapons capability, and perhaps the most frightening possibility is that one of these staggeringly powerful weapons will fall into the hands of one of the many terrorist groups that would give anything to get their hands on one.

So keep that in mind as you see what a nuke would do to your own home town. To use the Ground Zero II system, just type in the name of your city and country, select a bomb from the slider at the bottom, and click “nuke it!”

The damage caused by a nuclear explosion is affected by a multitude of variables, and some of these require powerful super-computers to be simulated properly. The terrain, buildings and weather patterns are not part of the calculations used to map the damage.

Fallout shows the possible dispersion of radioactive isotopes after six hours of the explosion, assuming a constant gentle breeze.

One Reply to “Have you ever wondered what would happen if a nuclear bomb goes off in your city?”