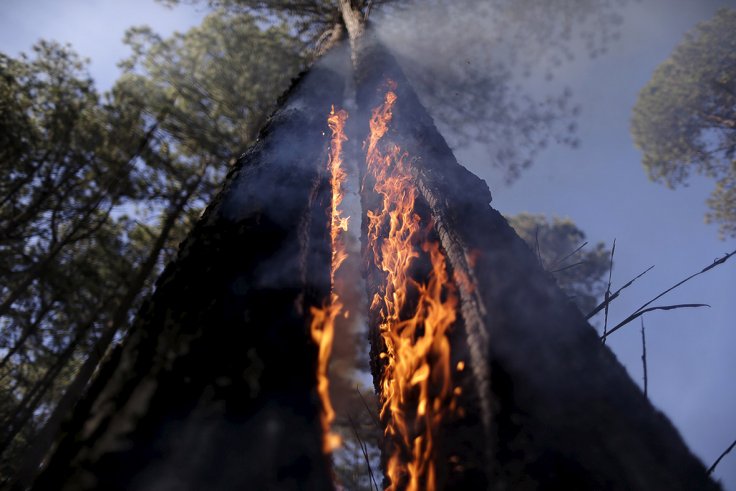 California is facing one of its worst fire seasons ever, thanks to extremely dry conditions caused by four years of drought. Firefighters have been tackling blazes across the parched state since the start of the summer.

Must read article! Water Revolution: This Gadget Makes Gallons of Drinking Water Out of Air

The Rocky Fire, which ignited at the end of July, consumed nearly 70,000 acres of northern California. This fire was on the verge of being contained, but there are fears it could merge with another huge blaze that has sprung up. The Jerusalem fire is raging through dry brush north of Napa Valley wine country.

All of the blazes have been fed by thickets of vegetation left desiccated by four years of drought, and fire managers said they were bracing for hot, dry conditions to persist throughout the summer.

A state of emergency has been declared in California after wildfires engulfed homes forcing thousands to move out of the northern part of the state. While more than 275 homes were completely destroyed in the blaze, about 1,300 people left Middletown, seeking shelter elsewhere.

California state governor Jerry Brown said many homes were destroyed in Napa and Lake counties and people were being evacuated from the area. Four firefighters suffered severe burn injuries and were admitted at a local hospital, the BBC reported.

Wildfires have been causing serious concerns in the state due to severe drought conditions and rising temperatures. In July, the western state had spent around $212m (£137m) to tackle wildfires, the spokesperson for the state’s forestry and fire protection department was quoted as saying.

Around 40,000 acres of land have been completely destroyed in Lake County by wildfires since Saturday, 12 September, and 1,500 residents asked to leave Middletown as the blaze continues to move towards the small town.

Meanwhile, at least 4,000 firefighters in Amador and Calaveras, were involved in extinguishing the blaze that started on Wednesday. So far, around 65,000 acres have been completely charred in the eastern part of the state as 86 homes and 51 buildings were destroyed.

Recommended article: DIY Survival Water Purification System – Save About $100 With This Fast, And Easy Build

The largest fires continue to rage in Fresno since July and around 128,800 acres have been destroyed so far.

One Reply to “Emergency: Californias wildfires wreak havoc in Middletown, Napa and Lake”