There are certain realities that are transpiring in the world today that none of us has any control over. The only thing that we have control over is our reaction to the events that we have no control over. We live in a world where the majority of our fellow citizens have chosen the life of sheep. It is a life that is devoid of insight, discernment, moral and physical courage.

When the riots begin in Jefferson, you need not fan the flames. Stay home and protect your family by all means necessary. And there is a another lesson to learn be not living in the matrix of evil, you will discover how to avoid being sent to a FEMA camp.

The Common Sense Show: Freeing America One Enslaved Mind At a Time

In my life as life as advocate for fairness and justice,  I used to believe and have as a life’s mission that if I could wake up enough people as to the matrix of evil that we are all living in, that humanity would throw off our collective chains of enslavement and we could conquer evil and establish a more sane system than the world we find ourselves hopelessly trapped inside of.

For years, I have tried to lead a revolution of consciousness which sought to gain momentum and stop evil in its tracks.  I now realize I was embracing a fool’s errand. When we, as a nation, accepted the murder of 53 million innocent Americans since 1972, we spat upon the word of God. When we, as a nation, allowed our leaders to conduct wars of occupation for fun and profit which resulted in the deaths of millions of innocent people,we became accomplices to genocide. When you allow your children to attend a school which teaches third graders about oral sex and condoms, we are preparing our children to inherit a world based upon depravity and abject satanically inspired evil.

Focus on Changing the Things You Can Change

The longer that I am engaged in the fight against evil, the more I begin to see the wisdom of the Bible.  Galatians 5:1 states that “For freedom Christ has set us free; stand firm therefore, and do not submit again to a yoke of slavery.”  I have the peace of mind to know that I do not live in the matrix of evil and I am not blinded by the trappings of this life. I will never submit despite the fact evil dominates the halls of Congress, the White House.  I am reminded by the media on a daily basis about  just how fun evil is.

I have forsaken the belief that I can change the world. All I can do is to save my soul and share my observations and experiences with a few other people in the hope that we can help each other reach a higher level of spiritual existence. For example, we all know that violence begets nothing but violence. No matter how justified or how unjust the killing of a 18 year old boy may be in Ferguson, MO., your violence will not change what has happened. Your participation under the encouragement of  the agents of antagonism which have been sent to Ferguson in order whip up the people into a riotous mentality of senseless violence, serves nobody but the evil intentions of those presently in power. These agents of evil seek to promote a civil war and they seek to divide and conquer us along racial lines, so that they can enact their martial law plans which involves the activation of the FEMA camps that I have written and documented so many times. Make no mistake about it, Ferguson is not its own end. It is the means to an end which ends in our total enslavement.

To all black, white, brown and yellow people, evil seeks to divide us and use as their instrument of terror civil unrest based upon racism and unwarranted fear. All we have to do is sit at home and say no this insanity in order for this to go away. As the Jefferson verdict is announced, sit by your door with your shotgun, in order to keep evil out, but do not feed evil by entering the streets. And while you are sitting at home today, pray for peace and for the discernment of the people in order that they will  not be used by the thugs that have been sent to agitate. There is power in collective prayer. Today is the day we can take a stand against evil by refusing to participate.

How to Avoid Being Sent To a FEMA Camp

Aleksandr Solzhenitsyn once said that “Violence can only be concealed by a lie, and the lie can only be maintained by violence”  Do you want to stay out of a FEMA detention camp? Then stay off the streets in Ferguson or wherever ACORN, the New Black Panthers and the Agents Provocateur from DHS are attempting to wreak their havoc. If we stay off of the streets in places like Ferguson, then there are no riots, there is no martial law, there are no roundups and the camps will sit empty and nobody has to die,at least not today. 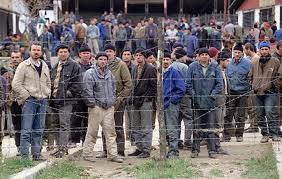 We do live in a time that the FEMA camps are indeed being activated. This is a time that Solzhenitsyn lived through as he and so many others were taken to the Soviet Gulag. After being incarcerated, Solzhenitsyn lamented that they should have fought back in their homes as the KGB came to claim their freedom. He once said “that if we could have make them wonder if they were going home to their families, we might have stopped the insanity”. When they do come for you, resisting in your doorway provides you with a better fate than what lies on the other side of the barbed wire.

Acceptance is about taking charge of the direction of our lives and making conscious decisions to not be taken off of the path that God has planned for us. We are not cursed, we are not victims of life, and no one is punishing us. We simply cannot stop evil, only the Second Coming of Christ can accomplish that goal. Acceptance is the recognition that our souls have been placed here by the Almighty to learn specific lessons. How to deal with evil is one of these lessons. We can only control our reaction to evil by refusing to participate in the evil and then resist with everything you have when evil comes looking for you in your home. For if you do these things, you need never worry about being sent to a  FEMA camp. More importantly, if you do these things, you will not lose your soul.