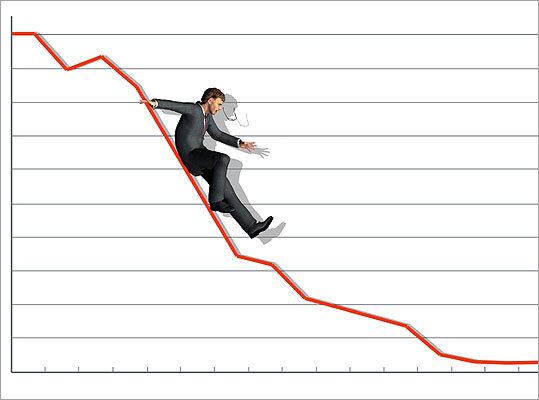 The line between a future of financial solvency and one of distress is thinner than you might think. The earlier you realize you’re having issues with debt, the better chance you have of fixing them, said Jessica Cecere, South Florida regional president for CredAbility, a nonprofit credit counseling agency Bankrate offers eight signs you’re flirting with financial ruin. If four or more of these signs sound familiar, it’s time to seek help, Cecere said.

“If you’re paying late because you can’t pay on time, that’s a clear indicator (of future financial trouble),” Boucher says.

“If you’re paying late fees because you’re just lazy about it, you’re throwing money away.”

A more serious symptom of financial distress is juggling monthly bills by making payments big enough and frequently enough to keep services flowing, but never paying balances on time and in full, Cecere said. Your debt worsens every month as balances grow.

“You’re thinking ahead of time, ‘I don’t really have enough money to pay my bills,’ and you’re sort of living paycheck to paycheck,” she said.

Basing your plans for financial stability on a future payoff, such as an inheritance, a run-up in the value of your home, or a big tax refund can put your finances in dire straits. It’s also a symptom of a bigger problem — rationalizing when it comes to your debt, Boucher said.

“You’re planning on a bonus that doesn’t materialize, or what we saw happening not too long ago, with people saying, ‘I can always suck more equity out of my property,'” he said.

“If you think like that, you’re really setting yourself up for a fall.”

Credit cards are best used as a convenient way to make purchases without having to carry cash and to earn rewards, Cecere said.

“If you’re a savvy consumer and you can use credit cards and you can get points for them … then you’re charging groceries and gas, but you’re paying for them at the end of the month,” she said.

Most couples have occasional fights about debt, but if you regularly fight with your spouse about money, it can be a sign there’s not enough disposable income to finance the family’s spending, Boucher said. Likewise, Cecere said if you’re regularly suffering from stress over heavy debts, it could be an indication that your financial situation is unsustainable.

“It’s on your mind, but you don’t want to talk about it. You can’t sleep at night because you’re worried about your bills,” she said.

If that description sounds familiar, Cecere said it might be time to seek a free, nonprofit credit counseling service.

If you’re constantly incurring fees for overdrawing your checking account, you could be on the brink of financial disaster, said Wayne Blanchard, senior partner at Money Professionals Group in Orlando, Fla. He compares non-sufficient fund fees to the nautical flags raised to warn of dangerous wind conditions.

Many serial overdrafters are struggling financially and don’t have income available to cover their debts, meaning they’re likely on the verge of having to declare bankruptcy.

If you’re unable to set aside a small amount of money for savings in your budget, your finances are on unstable footing, Boucher said.

“Savings is an expense, and it’s something that should be budgeted for just like any other expense,” Boucher said. “What’s going to happen is something is going to come along — an unexpected car repair or a home repair or an interruption in income — and you’re going to be in a very bad place.”

He said that while saving may be difficult, not saving puts you at risk of financial hardship.

“With no savings, you’re really standing on the edge of a cliff,” he said.

Blanchard agreed. He said many people rely on credit for their emergency backstop, but credit isn’t effective as an emergency savings fund. If banks see you regularly adding abnormally high charges, they’ll clamp down on your limit. You need to set aside money for unexpected emergencies and for your future retirement, he said.

Borrowing or withdrawing retirement funds from your 401(k) is a common thread in many of the cases of financial distress that Boucher has seen as a financial adviser. Boucher said, “401(k) loans are usually a bad idea under any circumstances, but when you have more than one, that’s a sign that you’re not managing your cash flow very well.

Using your home equity as a financial crutch is something Boucher often sees with clients heading toward financial distress. Boucher said such moves are especially ominous if they’re not due to a serious financial need but to a desire for “wants” like a vacation or a new car.

“You’re paying for a vacation with a home equity loan and you’re amortizing that over 15 or 20 years. That just doesn’t make any sense,” Boucher said.

Are you heading for a financial fall?

Cecere recommends looking for a free, nonprofit credit counseling service, if you fit too many of these warnings. Another option that I recommend is to follow this guide to overcome the imminent economic collapse. Conquering the coming collapse guide

One Reply to “10 Signs You’re Flirting With Financial Ruin”