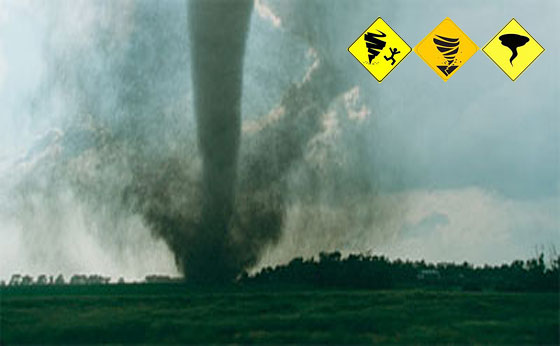 Whirling dust and debris. Snapping power lines. A continuous rumble or roar often compared to a freight train. And that feared funnel.

Tornadoes are nature’s most violent storms. Yet, many of us don’t know when it’s time to take tornado warning signs seriously enough to start crouching in the tub or in the basement covered by a mattress. Maybe we’ve experienced a tornado drill in school. But most of us have never and will never see a twister, except in “The Wizard of Oz.”

Although severe tornadoes are more common in the plains states, tornadoes have been reported in every state, according to the American Red Cross. There were more tornadoes this past April — 750 — than any other month in U.S. history, says Greg Carbin, warning coordinator meteorologist for the storm prediction center of the National Oceanic and Atmospheric Administration’s National Weather Service.

They are usually no more than a half-mile wide and move very rapidly west to east or southwest to northeast, preceded by large hail or heavy rain, he says. The likelihood of experiencing a tornado is very small, but it’s always best to be prepared and not put yourself in a risky position, Carbin advises.

“The most violent tornadoes can level and blow away almost any house and its occupants,” the NOAA reports. “Extremely violent F5 tornadoes are very rare, though. Most tornadoes are actually much weaker and can be survived.”

Taking precautions means understanding tornado warning signs. How many of us know blue-green flashes on the ground near a thunderstorm mean power lines are being snapped by very strong winds, indicating a possible tornado? Or that many tornadoes are wrapped in so much heavy precipitation or hail they can’t be seen? Those are among the warning signs listed by the NOAA/NWS storm prediction center.

Here are 10 signs that a tornado may be imminent:

1. When looking at the bottom of the cloud base. Beware if you see that it is actually rotating (even if slowly), rather than just gliding along.

2. Look for a lowering of the storm cloud base to what is called a wall cloud, a large lowering cloud formation. This is a potential tornado sign.

3. If you notice an area of whirling dust debris above the ground (similar to a ‘dust devil’ but bigger), and it is beneath a large storm cloud base, it may be a tornado sign – one may have already formed but is still up in the cloud.

4. If you are in a storm with heavy rain and hail, and it suddenly stops and becomes eerily quiet, it may be a sign of an impending rain-wrapped tornado.

5. An intense wind shift after the dead-calm is a further sign.

6. If the sky becomes a greenish black color, it may be a tornado sign.

7. The storm’s updraft creates hail and is located right above the tornado, so, hail (especially large golf ball size or larger) is a sign indicative of a possible tornado.

8. A loud continuous roar, rumble, or waterfall sound which does not quickly fade out like thunder, may be a sign that a tornado is approaching. Other sounds are similar to a train or a jet.

9. If you notice debris falling from the sky, it may be a sign that a tornado has formed and has scoured objects from the ground – hurling them up to great distances.

10. If at night you see bright ground flashes near a thunderstorm (blue-green-white), it may be a sign that a tornado is blowing out power transformers and power lines there.

One Reply to “10 Signs That A Tornado May Be Imminent”